It was how the place made you feel, like it was alive and biding its time before it crushed you.

Death is a Welcome Guest, by Louise Welsh

Death is a Welcome Guest is the second in Louise Welsh’s Plague Times trilogy. It’s not so much a sequel to her first in the sequence, A Lovely Way to Burn, as a companion piece. The apocalypse unfolding from another perspective. 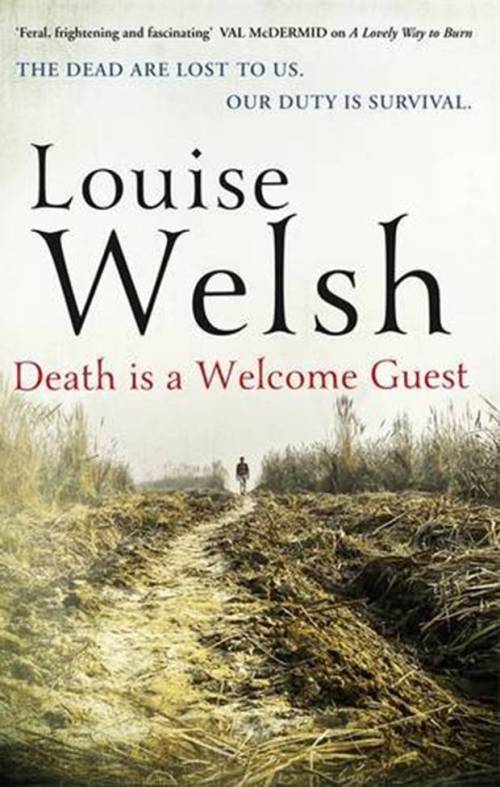 That perspective belongs to Magnus McFall, a stand-up comedian who as the novel opens is on the way to the gig of his life. He’s the warm-up for a popular tv comedian playing the O2 Arena in South London. Warm-up might not sound like much, but the O2 is a huge venue and any comedian who finds themselves performing there in any capacity is doing ok for themselves.

The problem is that as the first novel established the UK and much of the world is coming down with the Sweats, an influenza-like illness which is spreading rapidly and causing huge disruption. Magnus isn’t feeling too well himself as he heads to the O2, a sensation made worse when he sees someone evidently suffering from the Sweats pass out and fall under a train. Things are coming apart, he just doesn’t know yet quite how bad they’ll get.

On his way home Magnus sees a woman being attacked in an alley and goes to help. He drives off her assailant, but when more help comes they think he’s the attacker and he finds himself arrested for attempted rape. Magnus is in serious trouble. He was drunk, there’s no witnesses as to exactly what happened and the woman he saved was too drunk or sick to know what happened. He’s given a uniform marking him out as a vulnerable prisoner so the guards know not to mix him with the general population and then put in a cell to await trial. You’d think it couldn’t get much worse, but his cellmate falls seriously ill and the guards don’t seem to care. They only move Magnus when his cell mate, who’s received no medical attention, dies. Magnus gets moved, the body doesn’t. Something is very much up.

Magnus’ new cell mate, Jeb, is a quiet but violent looking man who apparently doesn’t normally share his cell with anyone. Jeb’s another vulnerable prisoner, generally a sign of a serious sex offender who other inmates might attack on the (usually correct) assumption that they’re a rapist or child molester. As the guards stop coming round Magnus and Jeb start getting hungry and realise that their cell could soon be their tomb.

The first third or so of Guest takes place in the prison and is incredibly tense (once the stage mechanics necessary to get Magnus in there while being innocent are done). It’s a bit of coincidence that Magnus ends up with another Sweats’ survivor, but not hugely so since presumably they were put together since neither was sick. Once they get out of their cell Magnus has to rely on Jeb’s prison-savvy to get out of a building expressly designed to stop people leaving and now overrun with other escaped prisoners all desperate and many dying. All this while wearing a uniform that marks Magnus out for attack by any prisoner who sees him and accompanied by a man who might well be a killer or worse.

Once they finally emerge the apocalypse is in full swing, indeed it’s mostly over. There are still soldiers trying to keep the peace and prevent looting, but not many and they’re clearly losing interest. Welsh easily evokes a devastated and empty England:

Almost all the shop windows that lined the road had been smashed. New clothes, some still on their hangers, lay scattered in heaps at the edge of the road, piled like storm-blasted seaweed at low tide. Trainers spilled from cardboard boxes inside a ransacked branch of Foot Locker and mobile phones were scattered like hand grenades outside EE Mobile. The bank sandwiched between the two plundered shops stood strangely intact, as if looters had decided they preferred solid merchandise to cash.

A nice touch here is Magnus’s own overheated imagination. He’s seen too many zombie movies and with corpses lying everywhere keeps imagining them getting up and coming after him, as if the reality weren’t bad enough. I found that stupid enough to be credible and it added a nice touch of absurdity which I thought very human.

Magnus is originally from the Orkneys and hopes that somehow his family might still be alive there (a pretty forlorn looking hope as several characters point out). He and Jeb head north, travelling together and slowly learning if not to trust each other at least to co-exist. Jeb’s close-mouthed about his past and doesn’t particularly believe in Magnus’s innocence (every prisoner claims they’re wrongly imprisoned). They’re together by necessity, not choice.

Welsh’s debt to the 1970s tv show Survivors is even more evident in this book than the last. Magnus and Jeb come to a country house where a small group are trying to re-establish a community. Among them is ex-army chaplain Jacob who rescues Magnus and Jacob from an attacker but seems perhaps a bit too ready to shoot to kill when facing challenge. Magnus and Jeb need to rest up so they temporarily join the community. Jacob hopes to persuade them to make their stay permanent.

As anyone familiar with the genre knows, the true threat after the apocalypse is other people. Two of the community have recently died, apparently through suicide. Jacob has his doubts. The first death he found credible, a distressed young woman who hanged herself, though the chair was a long way from the body. The second died from cut wrists but with no signs of hesitation marks and no prior indications suicide was likely. Anyone might do anything with the world ending, but if suicide is possible so too is murder.

Murder in a country house is as traditional as it gets, but when the murderer is one of a handful of survivors of a global apocalypse there’s nowhere to look for help. There’s no police and no backup. Just a random group of strangers every one of whom is going through enough trauma to turn anyone insane.

I did work out who the killer was, but that wasn’t remotely fatal as Welsh has plenty more story yet including rival groups of survivors and deeper questions of trust, morality and justice. What do you do with dangerous people when there are no police or prisons left? What prices are worth paying to reestablish community? Crime fiction is moral fiction, and by putting crime in a post-apocalypse context Welsh is able to strip these questions back and to force her characters to come up with their own answers.

My review of the first in this series, A Lovely Way to Burn, here. Credit for pointing me to this series at all belongs to Grant of 1st reading, and his review of this one is here.

9 responses to “It was how the place made you feel, like it was alive and biding its time before it crushed you.”