“Somehow, the idea of the devil in a motor boat sounds too utterly fantastic,” remarked the Inspector.

The Secret of High Eldersham, by Miles Burton

After finishing my #TBR10 (which I’ll post separately about) I found myself intensely busy at work and in need of lighter reading. Guy Savage had recently reviewed Miles Burton’s The Secret of High Eldersham which sounded a fun change from the sort of book I’d normally read. Besides, just look at that cover: 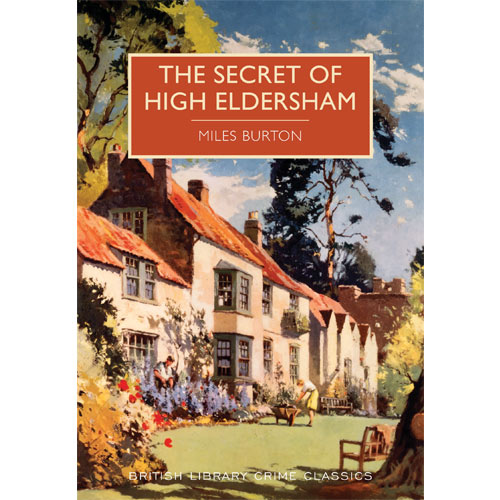 I adore the British Library Crime Classics covers. It’s a shame I don’t generally enjoy vintage cosy crime, because they all look quite wonderful.

This one’s a bit of an oddity. Miles Burton was a hugely successful writer in his day and his series character Desmond Merrion was a popular hero. Merrion takes a while to arrive though, with the book opening with the retirement of a village pub landlord due to failing trade and his replacement by a retired police officer who takes on the lease. A short few years later and the new landlord is found dead in his own pub, stabbed to death.

The local police aren’t used to investigating murders and Scotland Yard is called in, in the form of Detective Inspector Young. After making some initial headway he finds his investigation stalled. Young was warned by the local bobby that “strangers don’t never prosper in High Eldersham” and that odd things happen to outsiders. Increasingly he feels “himself surrounded by impalpable forces beyond his power to combat.” Spooky stuff, but perhaps it’s just isolation and imagination getting to him.

Detective Inspector Young does what any sensible professional police officer would surely do in such a situation. He calls on an amateur to help him out.

Desmond Merrion is an independently wealthy war veteran with a sharp mind and a sizable independent income. Young captures his attention with the mysterious claim that “High Eldersham holds one of the most remarkable secrets of recent years.” Intrigued, Merrion makes his way to High Eldersham incognito so that he can make unofficial inquiries alongside Young’s official ones.

It’s no great spoiler to say there’s a folk horror element to the Secret of High Eldersham. Young quite quickly becomes convinced that witchcraft is being practised in the town. He finds a makeshift wax doll with a needle stuck into it in a suspect’s home, and on a return visit Merrion gets a closer look and discovers that the doll was marked with the dead man’s name. Neither Young nor Merrion believe in magic, but the villagers might and someone could be using that local superstition as a cover for wider crimes.

Merrion, aided by his indefatigable batman Newport, poses as a holidaying amateur sailor and by that means gets closer to some of the local gentry. Among them is an odd sort named Laurence Hollesley that Merrion knew from the war. Hollesley’s in love with the local magistrate’s beautiful daughter Mavis and soon Merrion is too, but evidence points to her father as being involved in the various nefarious goings-on. Can Merrion find out what’s really going on? And if Mavis’s father is involved, can Merrion protect her from that terrible truth?

High Eldersham is something of a blend between detective story, thriller and folk horror tale. There are multiple story strands, all of which of course tie up together in the end (somewhat coincidentally so to my mind given at one point Young goes off to investigate a totally separate case in London which then turns out to be connected to the events in High Eldersham). There’s murder, London drug dealers, Hollesely and his sinister butler getting up to curious deeds off the coast, a romance sub-plot, a mysterious coven practicing dark rituals. It all gets a bit much to keep track of and while I never got confused I did find myself thinking there was perhaps a little too much packed in here.

Burton (a pen name) has a lovely eye for description. Much of the action takes place off the coast, between a battered old boat Merrion hires, Mavis’s prized speedboat and Hollesley’s yacht and Burton clearly relishes descriptions of the sea and sky.

Saturday turned out to be a bright, cold day, with a fresh breeze from the north-westward. Towards the evening, however, the wind backed to the south-west and the weather grew considerably milder. At the same time, fleecy masses of cloud began to float slowly across the hitherto clear sky.

Burton’s persuasive familiarity with the sea works well in a particularly notable scene where Merrion finds himself stranded on a fog-shrouded sandbank with water rising up on all sides and no idea which way to swim to find the shore. The witchy scenes are also suitably creepy:

… he came to a stretch of smooth and level turf, set in the centre of the coppice. He explored this with considerable care. It seemed to be roughly circular, with a diameter of rather more than a hundred feet. In the centre was a burnt patch, upon which lay a few ashes and charred pieces of wood. Having looked very carefully at this, Merrion crossed the open space to its boundary, which was formed by the trees and a mass of rough brushwood growing among them. Making his way slowly round he came upon two tall trees growing some five yards apart, their interlaced branches forming a canopy above his head. And half-way between the two trunks stood a huge stone, which had at one time been roughly hewn. The top of the stone was hollowed like a saucer, and into this depression Merrion cast the rays of his torch. Beneath a layer of fallen leaves and pieces of bark the surface of the stone showed smooth and worn. But upon it were spots of candle grease, and between them dark stains as of dried blood.

In the end though while I enjoyed High Eldersham it is fair to say that it would be a better novel with a little less going on. It all gets a bit unlikely. Young and Merrion quickly work out that someone has resurrected a centuries old declining witch cult and then pretended to have magical powers so as to control the locals, but I couldn’t help thinking that there might have been simpler ways for the villains to carry out their nefarious plots that might have involved less effort. The characterisation is pretty straightforward which meant that I worked out who was responsible pretty quickly, and while the why was more elusive it wasn’t really quite interesting enough to justify the extraordinary means employed.

If you’re a fan of folk horror this is worth reading. If, however, you’re more a fan of vintage crime I suspect you can give it a miss.

Guy brought this to my attention which his review here. Other reviews worth noting are at the Past Offences blog here and the Cross Examining Crime blog here. Both Past and Cross picks up on the potential stylistic connection to The Riddle of the Sands, another yacht-based thriller which I think benefits from a considerably tighter focus than High Eldersham.

15 responses to ““Somehow, the idea of the devil in a motor boat sounds too utterly fantastic,” remarked the Inspector.”