Life was not an art-form, or rather, it was an extremely mixed genre.

Journey by Moonlight, by Antal Szerb and translated by Len Rix

Some books are too subtle to be easily reviewed. You lose them as you try to describe them. They slip away, leaving just a vague sense that you haven’t done them justice.

Antal Szerb is one of the 20th Century’s great writers. His The Pendragon Legend is one of the funniest shaggy dog tales ever committed to print and his Oliver VII is easily one of my favourite novels, featuring as its main character a king who ends up as incognito head of the resistance to his own reign. Szerb writes with intelligence, empathy, a gentle but very funny wit and an acute sense of the absurd. 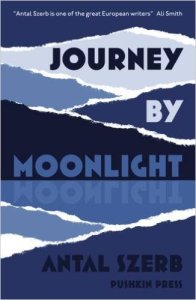 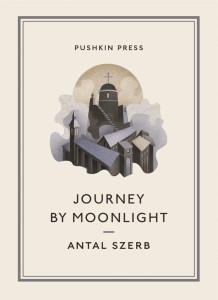 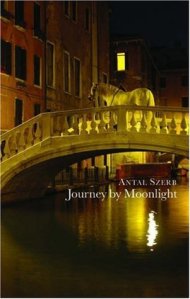 The blue cover is the one I have on Kindle. The creamy-brown cover is an earlier one from Pushkin which I love, and the one with the photo of Venice is again I think very good and is the cover I have on my physical copy.

The trouble began in Venice, with the back-alleys.

Mihály is on honeymoon in Venice with his new bride Erzsi. He’s a dreamer whose family are pressing him hard to settle down and to take a responsible role in the family business. He married Erzsi in part as she seemed a solid bourgeois who would help him adapt to what’s expected of him. It didn’t occur to him that she might have married him for what he is, not what his family want him to be.

She had long known that she did not understand him, because Mihály had secrets even from himself, and he did not understand her since it never occurred to him that people other than himself had an inner life in which he might take an interest. And yet they had married because he had decided that they understood each other perfectly, and that, for both, the marriage rested on purely rational foundations and not fleeting passion. For just how long could that fiction be sustained?

Erzsi is on her second marriage. She’s more experienced than Mihály, more worldly. When he wanders off one evening into the back-streets of Venice, not returning until the next day, she gets her first hint that there may be serious issues in store for them and that their mutual fiction might not be a lasting one. Things get worse when they run into Janos – a roguishly attractive childhood friend of Mihaly’s who stirs up old memories of adolescence.

Mihály tries to explain his past to Erzsi, but the more he does so the clearer it becomes that it still has a hold over his life that he barely understands and doesn’t particularly want to escape. When the time comes for the newlyweds to travel on Mihály gets briefly off their train to buy some supplies. He then “involuntarily, but not unintentionally” gets back on the wrong train. Now Erzsi’s en route to Paris on her own while Mihály bumbles across Italy in a meandering quest for he’s not quite sure what.

At first it seemed to me there was a danger that Szerb would fall into that old trap of portraying a thoughtful and artistically sensitive man held back by a sensible yet dull wife. What follows though is vastly more interesting and intricate than that.

Mihály meanwhile comes to discover that as the old joke goes the past isn’t what it used to be. While he’s not a first person narrator he does still manage to be terribly unreliable, comically so. It’s perhaps natural given his insular nature that he doesn’t understand other people very well and mistakes much of what’s going on around him, but it’s more surprising to discover that he doesn’t understand himself terribly well either.

“I know what’s wrong with me,” he told the doctor. “Acute nostalgia. I want to be young again. Is there a cure for that?”

Mihály’s quest takes him across Italy to an encounter with one of his old friends who’s since become a particularly holy monk; to a series of missed and partial encounters with Eva; to further run-ins with Janos; and to an affair with an American tourist named Millicent (“‘Millicent,’ he said. ‘There’s someone in the world actually called Millicent!'”). As his money runs out he comes increasingly to realise that “There’s no cure for nostalgia” and the prospects of him ever returning to Erzsi become ever slighter.

The focus of the novel then shifts to Erzsi’s viewpoint. She too is adrift: nobody expects to be cut loose on their honeymoon. The difference is that while Mihály may be content to drift downwards into a morass of memory, Erzsi is made of firmer stuff.

All her life she had been the model of a good girl, adored by her nannies and fräuleins, her father’s pride and joy, the best pupil in the form, sent abroad to academic competitions. Her whole life had been sheltered and ordered, the good bourgeois life consecrated to a sternly supervised moral order. In due course she married a wealthy man, dressed elegantly, took on a grand house and presided over it as a model housewife. She always wore the identical hat sported by every other woman of the same rank in society. She took her summer holidays where fashion dictated, held the same opinions about theatrical productions, uttered the turns of phrase currently de rigueur. In everything she was a conformist, as Mihály would say. Then she began to get bored.

Erzsi married Mihály so he could save her from the very conventionality he wanted her to lend him. They never understood each other, but she at least is capable of understanding that and she soon realises too that she doesn’t actually need him as she’s perfectly capable of saving herself. Mihály is a weak man. His obsession with his past allows him to evade his present and is part of a wider lack of interest in the outside world. As an adolescent he was never quite as decadent as his friends, and now as an adult he yearns after something he thinks he lost but that was never really his.

Journey then is a novel of reversals. Nobody here is quite as we first expect them, something that’s true not only of Mihály and Erzsi but of many of the supporting characters too. Mihály can be irritatingly wet at times, but he’s not a villain. He is, literally, lost and if he’s perhaps less than he seems then Erzsi in turn is more. It’s the reader as much as anyone else who journeys by moonlight, and what seems one thing when seen through shadows from a distance can reveal itself to be something quite different close up.

Journey is a slower starter than either Pendragon or Oliver. Mihály isn’t always the most engaging protagonist and Szerb is right to ensure that he’s not therefore the only viewpoint character. Adolescent games however sophisticated are still fundamentally immature, and Mihály’s quest is deeply self-indulgent and ultimately rather selfish.

Despite those initial concerns, as it develops Journey shows such sympathy for its characters and by extension for all of us that it’s a hard novel not to love. Mihály and Erzsi are flawed and so are we. Their troubles and adventures are absurd and so are ours. Szerb was a kind man. He wrote a kind book.

Journey has been widely reviewed. I’d draw your attention to Tom’s review at A Common Reader, here; Guy’s review at His Futile Preoccupations here; and Kaggsy’s review at Kaggsy’s Bookish Ramblings here. Nick Lezard’s review at the Guardian is also worth reading and can be found here.

25 responses to “Life was not an art-form, or rather, it was an extremely mixed genre.”