He was more a man of preferences than assumptions.

Bartleby the Scrivener, by Herman Melville

It’s a daunting sort of name Herman Melville. Not intrinsically, but because of Moby Dick of course. Like the names of a fair few great authors Melville’s comes with a slight expectation that reading him will be some kind of worthy, possibly improving, labour. One feels one should, but somehow the prospect never looks much fun.

Well, that’s how he’s always been for me anyway. I still haven’t read Moby Dick, but I have now read Melville’s infinitely shorter and less intimidating Bartleby the Scrivener and even though John Self of The Asylum, Trevor of themookseandthegripes and Kerry of Hungry like the Woolf all told me it was great, I was still surprised at how great it was. 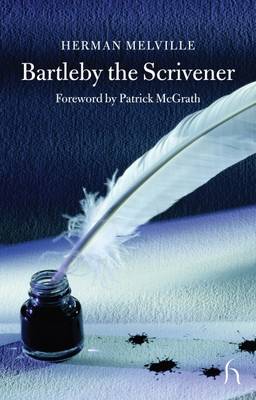 The narrator is a lawyer on Wall Street. He employs two scriveners (legal clerks basically) and a copy boy in a small office which has nothing much by way of view. He’s a sensible and solid sort of man. Reliable. The sort you’d want if you had some tedious piece of property conveyancing to do and wanted it done meticulously but didn’t need any particularly creative thinking being put into it.

His first scrivener is nicknamed Turkey and is dependable before lunch, but has a tendency to return red-faced and irascible after it. In the morning Turkey has a careful hand. In the afternoon however it’s smudges, dripped ink and a more incautious approach than is perhaps entirely appropriate.

Alongside Turkey is Nipper. Nipper has poor digestion. In the mornings he’s irritable and difficult and his concentration is poor. After lunch though his stomach settles and his work is as good as Turkey’s was in the morning. Here’s Nipper struggling with the table he works at:

Though of a very ingenious mechanical turn, Nippers could never get this table to suit him. He put chips under it, blocks of various sorts, bits of pasteboard, and at last went so far as to attempt an exquisite adjustment by final pieces of folded blotting paper. But no invention would answer. If, for the sake of easing his back, he brought the table lid at a sharp angle well up towards his chin, and wrote there like a man using the steep roof of a Dutch house for his desk:–then he declared that it stopped the circulation in his arms. If now he lowered the table to his waistbands, and stooped over it in writing, then there was a sore aching in his back. In short, the truth of the matter was, Nippers knew not what he wanted. Or, if he wanted any thing, it was to be rid of a scrivener’s table altogether.

That final sentence contains a world of frustration.

Ginger Nut is a young boy who mostly goes out to buy ginger nut biscuits for the others. It’s a well ordered office, but an extra hand would be useful. Bartleby is hired. He’s a pallid and reserved fellow who turns out at first to be highly efficient. He works quietly behind a screen stolidly ploughing through his documents without complaint. He’s a model employee.

All goes well, until one day the narrator asks Bartleby to help check a document:

It is, of course, an indispensable part of a scrivener’s business to verify the accuracy of his copy, word by word. Where there are two or more scriveners in an office, they assist each other in this examination, one reading from the copy, the other holding the original.

This actually carried on until right into the 1980s (possibly the 1990s). A colleague of mine as a trainee used to have to sit in a room with a copy of a bond prospectus in one hand, a bottle of seven-up in the other and another trainee holding another copy of the prospectus. One read it out. The other checked what was read against his copy. The seven-up kept throats moist. If that had still been going when I trained I doubt I’d have made it to qualification.

Bartleby doesn’t like the idea much either. He’s asked to help check a document. It’s a perfectly routine part of his job. He doesn’t come into the narrator’s office so the request is repeated, more loudly. The answer comes:

“I would prefer not to.”

And that’s where things suddenly get much less funny.

I sat awhile in perfect silence, rallying my stunned faculties. Immediately it occurred to me that my ears had deceived me, or Bartleby had entirely misunderstood my meaning. I repeated my request in the clearest tone I could assume. But in quite as clear a one came the previous reply, “I would prefer not to.” “Prefer not to,” echoed I, rising in high excitement, and crossing the room with a stride. “What do you mean? Are you moon-struck? I want you to help me compare this sheet here–take it,” and I thrust it towards him. “I would prefer not to,” said he. I looked at him steadfastly. His face was leanly composed; his gray eye dimly calm. Not a wrinkle of agitation rippled him. Had there been the least uneasiness, anger, impatience or impertinence in his manner; in other words, had there been any thing ordinarily human about him, doubtless I should have violently dismissed him from the premises. But as it was, I should have as soon thought of turning my pale plaster-of-paris bust of Cicero out of doors. I stood gazing at him awhile, as he went on with his own writing, and then reseated myself at my desk. This is very strange, thought I. What had one best do? But my business hurried me. I concluded to forget the matter for the present, reserving it for my future leisure. So calling Nippers from the other room, the paper was speedily examined.

We all live by social contracts, by expectations of what is and isn’t permissible. We may dream of telling a boss to go stuff it, but mostly we don’t. Everywhere I’ve ever worked the underlying reality is that employees must do what they are told or look for another job. Employers though still mostly dress orders up in polite clothing. “Could you type this up for me please?” “I’d like you to take a note in this meeting.” “If you could turn the draft by tomorrow morning that would be great.” They’re expressed as requests, but we all know they’re not really.

What happens when someone doesn’t care about the unwritten rules? If I say to someone “could you let me have those deeds please?” and they reply “I would prefer not to” what do I do with that answer?

Actually, that one happened to me once when I was a junior lawyer, with a senior partner’s PA. I had no idea what to do. The social contact was simple. I was a fee earner. She was a PA. It was her job to give me those deeds. When she said no I was lost. I couldn’t go back to the partner and say I hadn’t been able to get the deeds because his PA didn’t want to give them to me. I had to negotiate with her. The truth was that when she broke the social contract there wasn’t actually much I could do about it.

That’s what particularly interested me here. There’s a lot in this story. There’s a great many possible interpretations (and I’ve linked to three different blogs to show some different takes). What struck me most was that it asks precisely that question of what happens when someone just doesn’t care about the social rules we all live by?

I won’t say how the story develops or what answers it has, but I will say that for a novella that opened with comic scenes worthy of The Diary of a Nobody to then go onto questions of that difficulty is no small achievement. To stay funny while doing so is simply brilliant.

In the end there’s something profoundly disturbing about Bartleby as a character. His passivity becomes both sinister and pathetic. At one point he is asked to be at least a little reasonable:

“At present I would prefer not to be a little reasonable,” was his mildly cadaverous reply.

And why should he be? Why should any of us be? Why should we do that which we prefer not to? Mevlille examines pity and despair and purpose and meaning (and much more besides), and he does so while being funny and without even breaking the 100 page barrier. He leaves me wanting to read more by writers such as Beckett and Kafka, and maybe even one day when I’ve finished Proust I’ll read Moby Dick itself.

It is still quite daunting though.

18 responses to “He was more a man of preferences than assumptions.”