Talk and cock is all I got

The Transmigration of Bodies, by Yuri Herrera and translated by Lisa Dilllman

Yuri Herrera’s Signs Preceding the End of the World remains the leading contender for my book of the year. I was blown away by his use of myth and language to create something that seemed both archetypal and yet wholly new.

The Transmigration of Bodies isn’t in that league, but it’s still well worth reading. Signs married classical Greek and Aztec mythology to a contemporary plot; Transmigration does something similar, save that here the mythology is that of Sam Spade and Lew Archer, the mythology of hardboiled and noir fiction. 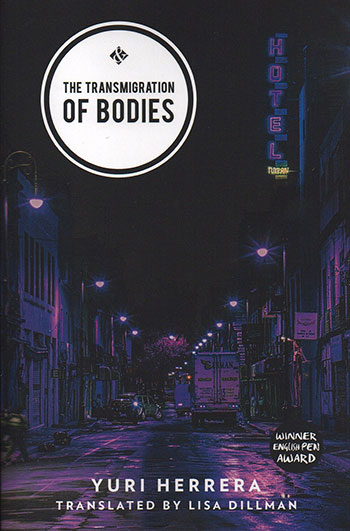 Love that cover. Here’s the opening sentences, as hardboiled as you could wish:

A scurvy thirst awoke him and he got up to get a glass of water, but the tap was dry and all that trickled out was a thin stream of dank air. Eyeing the third of mezcal on the table with venom, he got the feeling it was going to be an awful day.

That him is “The Redeemer”, a lawyer and general fixer who gets things done for people who need things doing and who doesn’t ask too many questions. He’s a man who “excelled at nothing but the ability to diminish malediction; to free folks from cell blocks, or their own promises.” Right now he’s holed up in his apartment long on hangover and short on food and water, but unwilling to go out since an epidemic which the government has indicated “may be a tad more aggressive than we’d initially thought” is sweeping the country leaving bodies and chaos in its wake.

He whiles away the time drinking mezcal and fooling around with his neighbour the “Three-Times Blonde”. Her boyfriend’s not at home and nobody wants to travel and risk exposure to infection. The Redeemer may never get another opportunity to screw the Three-Times Blonde, but there’s no condoms and anyway local crime boss the “Dolphin” (so nicknamed for having “burned a hole in his nose snorting too much blow”) calls up with a job. Down these mean streets a man must go…

The job’s a messy one. They always are. The Dolphin’s son’s been kidnapped by a rival crime family, and in return he’s kidnapped one of theirs, Baby Girl. Problem is she’s dead, killed by the epidemic. That’s bad, but it turns out Dolphin’s son’s dead too of a hit and run. Both families have kidnapped corpses, but they still need an exchange so they can bury their own and for an exchange to work you need middlemen to make the necessary arrangements.

The Redeemer takes local heavy the Neeyanderthal along by way of muscle, but mostly he does his job through a mix of attitude and chat:

He helped the man who let himself be helped. Often, people were really just waiting for someone to talk them down, offer a way out of the fight. That was why when he talked sweet he really worked his word. The word is ergonomic, he said. You just have to know how to shape it to each person. One time this little gaggle of teenage boys had gone to the neighbor’s on the other side of the street and stoned the windows and kicked the door for a full half-hour, shouting Come on out, motherfucker, we’ll crack your skull, and the pigs hadn’t deigned to appear; that was one of the first times the Redeemer had done his job. He went out, asked in surprise how it was they’d yet to bust down the door and added You want, I’ll bring you out a pickax right now, and that sure calmed them down; see, it’s one thing to front, to act like a big thing, but burning bridges, well that’s a whole ’nother thing. Soon as he saw what was what the Redeemer added: Tho, really, why even bother, right? Man’s in there shitting himself right now, and they all laughed and they all left.

The language here is a mix of high-end and slang. Words get thrown in like dieresis, ergonomic, but though is shortened throughout to tho. Everyone who can be given a nickname has one, so much so that when a character is described by their actual name I wondered why they didn’t stand out enough to get called something new.

The Redeemer’s equivalent working for the other family is the Mennonite. Dolphin’s daughter is the Unruly. Names here have power. A name captures character while providing protection and camouflage. If you call the Redeemer you expect redemption, his name is his calling card, but his personal life stays screened behind it and he can remain both public and anonymous. That’s useful whether you’re dealing with criminals or the authorities (assuming you can draw a distinction).

The epidemic has stripped their world back to its essence, but there’s a sense it hasn’t changed anything. Even before the police and government withdrew they were never in charge. If you have a problem you go to one of the families or you go to the Redeemer or the Mennonite or someone like them. If you know something you keep your mouth shut about it, and if you don’t know anything you pretend you do. It’s a world of connections, favours owed and repaid, social currency.

As with Signs there’s some lovely imagery. I’ve discarded more quotes than I’ve used here, but I couldn’t resist this one from a brothel the Redeemer visits while working out what happened to the dead son:

One girl was dancing before a cluster of liquored-up fools, naked but for the mask over her mouth; each time she leaned close she made as if to take it off, and the boozers whooped in titillation.

Sex and death. There’s nothing like a crisis to take us back to the essentials. The epidemic allows Herrera to cut away everything but that he wishes to explore: existence in anarchy; the use of informal social networks where formal ones are inadequate; navigating a world where potentially lethal violence is rarely more than a wrong word away. The parallels with Mexico as it actually is today are obvious. The epidemic will burn itself out, nobody here thinks it’s the end of the world, but when it does all that will change is more people on the streets. That and it’ll be easier to find an open pharmacy in which to buy some condoms.

Unsurprisingly, there are many. Tony of Tony’s Reading List reviewed it here; Trevor of The Mookse and the Gripes here (I absolutely agree with his final two paragraphs); and David Hebblethwaite wrote two posts on it, one on the use of names in the fiction here and the other on networks and conversations here. I also rather liked this James Lasdun review in the Guardian, which is a little more critical of it than I am (though still overall positive). I’m sure there are many more, and if you wrote one or know of one please do leave a link in the comments.

13 responses to “Talk and cock is all I got”