She left her hesitations behind with her home-made woolens.

Miss Pettigrew Lives for a Day by Winifred Watson

Written in 1938 Miss Pettigrew is an utterly delightful and absurdly affectionate fairy-tale. It tells of how the mousey and over-looked Miss Pettigrew through a clerical mishap at her employment agency meets nightclub entertainer Delysia LaFosse and over the course of a single day has her life utterly transformed.

a middle-aged, rather angular lady, of medium height, thin through lack of good food, with a timid, defeated expression and terror quite discernible in her eyes, if any one cared to look.

That “if any one cared to look” there is devastating. Miss Pettigrew is a desperate woman. Her money’s run out, her string of governess jobs have been a sequence of disasters and if she can’t find a new position within the day she’ll be homeless. Her clothes are threadbare and she expects nothing but rejection when she goes for one last job interview.

When she knocks on Delysia LaFosse’s door what she finds isn’t what she expects at all. Delysia is beautiful, glamorous, rather fast. There’s no evidence of a child (because Miss Pettigrew has been sent to the wrong job) and Delysia has no idea why she’s there but Delysia’s life is full of random happenstance so the appearance of a dowdy middle-aged woman isn’t particularly surprising to her. 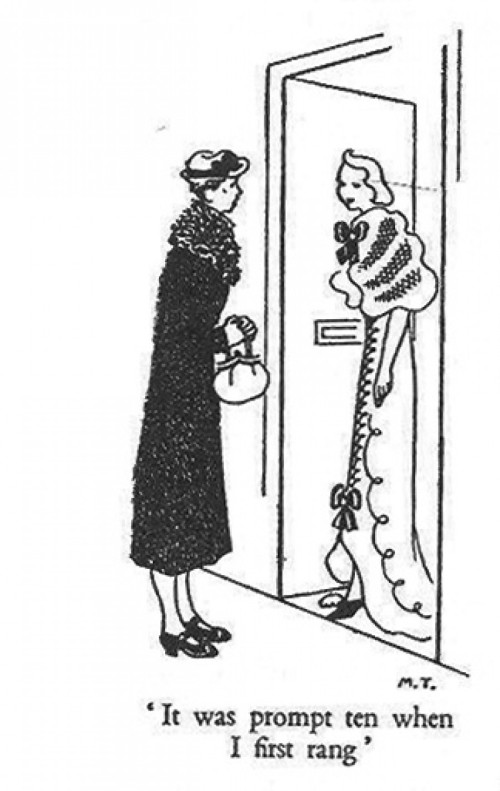 Before Miss Pettigrew can explain her presence the dashing young Phil emerges from the bedroom. Miss Pettigrew is shocked, but when Delysia asks for help to get Phil out without hurting his feelings she somehow manages the task and from there the day is set. Shortly after the doorbell rings again and in walks Nick, nightclub manager and by appearance matinée idol. He’s fantastically jealous and if he learns Phil’s been there it’s all up for Delysia. Suddenly Miss Pettigrew is needed. She’s never been that before.

What follows is a dizzying array of callers and escapades. Phil and Nick aren’t the only men in Delysia’s life and while Delysia is charming an ability to cover her tracks isn’t among her talents. Soon Delysia has adopted Miss Pettigrew, Guinevere, as a dependable friend in her hour of need. Miss Pettigrew tries to muster up the courage to say she’s there for a job but instead finds herself sucked into a world of glamour and just plain fun that her parents long warned her against and yet which doesn’t seem so bad when she finally sees it in the flesh.

There are cigars left behind by Phil to explain to the magnetically caddish Nick, the smoothing of Delysia’s friend Miss Dubarry’s boyfriend troubles to attend to, a cocktail party to attend, a first visit to a nightclub… As the day goes on Miss Pettigrew finds herself something else she’s never been before: accepted.

Until this day Miss Pettigrew had always prized being a lady above all else. It hasn’t got her much, only “polite, excluding courtesies” from gentlemen and her current poverty. Still, it’s how she was raised:

It explain a lot that her father thundered and fulminated while her mother whispered and breathed. What hope poor Miss Pettigrew? No wonder she made her forties without ever having been kissed.

Delysia though gives her confidence, asking for help and advice and sharing without second thought her clothes and life. Miss Dubarry owns a leading beauty salon and gives Miss Pettigrew a transformative makeover (something often promised in real life, but which more usually seems to result only in the purchase of another moisturiser and a remarkably expensive eyeshadow).

It’s nonsense, of course, but it’s beautiful nonsense. I was reminded slightly of The Grossmiths’ The Diary of a Nobody which like Miss Pettigrew is a supremely compassionate novel. Nobody here is truly wicked, even Nick who’s the closest to a villain the book has is just vain and self-centred rather than actually being bad.

The book does contain a few of the less pleasant attitudes of its time. Miss Pettigrew at one point criticises Phil as having “a little Jew in him” and suggests “when it comes to marriage it’s safer to stick to your own nationality”. Happily, these elements come up on only one or two pages out of the entire 234-page novel and I think one can make some allowances for when it was written.

Miss Pettigrew is an old-fashioned champagne glass of a novel. It’s deceptively light, effervescent and packs a surprising punch. It’s always pretty obvious what’s going to happen, and yet I wanted to see it happen all the same because Watson had me caring about all of them. Will Delysia find the right man? Will Miss Dubarry be reconciled with her Tony? Will Miss Pettigrew’s new friends stick by her when they learn why she really turned up? You don’t need to read the book to know how those questions will be answered, but as with any good romantic comedy the trick is in how they’re answered. It’s a book for when you’re feeling a bit down and need a lift, or if you’re emerging from something terribly dark or serious and need a breath of heady air. It’s lovely, and that’s not a word I get to use of many of the books I tend to read.

I’ll end by noting that this was my first Persephone Books title and I was hugely impressed by the sheer quality of the book. It’s nicely bound, sits well in the hand, the paper’s high quality and the spine doesn’t crack when you hold the book open. It’s peppered with period illustrations from the original text which are quite adorable and it even comes with its own bookmark. Extraordinary.

Lots, most of which I’ve lost the links to. Here however is Jacqui’s of JacquiWine’sJournal, here‘s Ali’s of Heavenali and here‘s Simon Savidge’s of SavidgeReading. As ever please feel free to link to others in the comments.

19 responses to “She left her hesitations behind with her home-made woolens.”