The Arthur C. Clarke Award for Science Fiction Literature is one of the very few literary prizes I pay any attention to. In part that’s because I don’t read enough science fiction to otherwise be on top of what’s coming out, but it’s also because it’s a well curated prize that really does tend to catch much of what’s most exciting in the field.

Lauren Beukes’ second novel, Zoo City, won the prize back in 2011. That caused some controversy, with many arguing that it wasn’t science fiction at all but rather a fantasy novel which shouldn’t even have been shortlisted (hardcore genre fans can get very bullish about defending genre boundaries). For me the better view is that the boundaries aren’t the point. The point is that the Clarke Award did its job, by finding a bloody good book and shouting to the world about it. 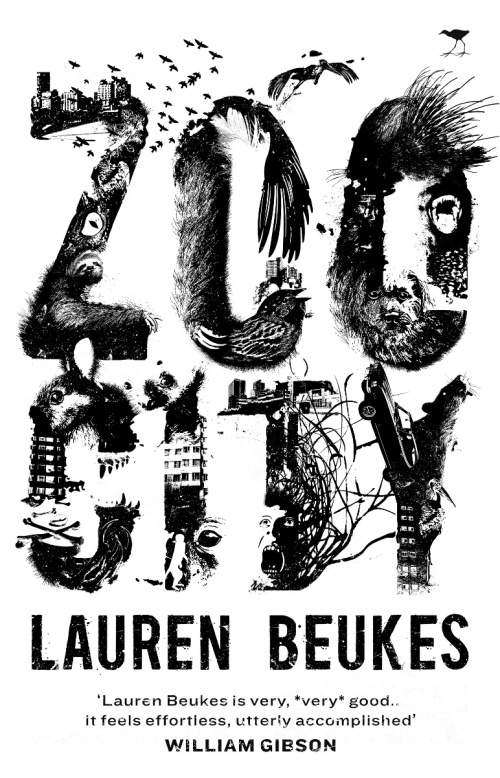 Zoo City is the Johannesburg ghetto where the “animalled” live. The animalled are people who carry the guilt of another human being’s death in an unusually literal way, manifested in the form of animals which they must keep near them at all times. Zinzi December, the protagonist, used to be a Johannesburg lifestyle journalist until she fell into addiction and got her brother killed. Now she has a sloth which goes with her wherever she goes – a living reminder of her sense of responsibility for her brother’s death.

The animalled are stigmatised. In China, the novel mentions at one point in passing, they’re executed on the assumption that whatever they did to end up with an animal must necessarily be a crime worthy of execution. They’re outcasts, and since few people want to employ a presumed killer who is accompanied everywhere by some bizarre creature (examples in the book include a sparrow, a bear, a mongoose, a vulture and much more) they can’t get regular employment.

Other than the presence of the animalled the world of Zoo City is our world. People started being animalled in the 1980s, the first being an Afghan warlord who manifested a penguin which he promptly issued with a custom-made bullet-proof vest. The phenomenon then quickly spread worldwide (the timeline is similar to the spread of Aids in real life). Some seek explanations in religion, others by reference to dodgy sounding quantum physics, but nobody really knows and from the point of view of the animalled it doesn’t really matter.

Being apart from your animal causes profound psychic stress. If your animal dies, you do too (and in a particularly eerie fashion). The only upside, and it’s not much of one, is that each animalled person gains a small magical power.

Zinzi December’s magical gift is the ability to find lost possessions. That’s a talent you can charge people for, that and her writing ability which makes her particularly good at crafting email scams to lure in unsuspecting first world retirees. The emails apparently come from:

…an old lady with a flooded mansion, desperate to sell her priceless antiques cheap-cheap. A Chechnyan refugee fleeing the latest Russian pogroms with her family’s diamonds in tow. A Somali pirate who has found Jesus and wants to trade in his rocket launcher and ransom millions for absolution” and to make some money while they do so.

What each of them has in common is the need to get a large amount of money out of South Africa, the promise of rich rewards for the kindly stranger who helps with that, and some unfortunate up-front administrative fees that can’t be paid from in-country…

We’re in noir territory then, with Zinzi a down at heels and distinctly morally ambiguous PI. Soon a pair of hired thugs (with poodle and vulture in tow) are pressuring Zinzi to take on a job for a reclusive music producer who’s lost one half of his latest boy-girl pop sensation. Zinzi doesn’t do missing people, but when the money’s right how hard can it be to find one lost teenager? Besides, there are some people it’s very hard to say no to.

The cover for my copy of Zoo City comes with a William Gibson quote, which makes sense because Beukes has a lot in common with Gibson. Neither has any real interest in the how of their world, whether the animalled or Gibson’s Cyberspace could actually happen. What each focuses on instead is the experience, the personal and social impact of change.

Beukes’ first novel, Moxyland (which I reviewed here), was outright cyberpunk in the classic Gibsonian mould. Here she’s writing what could be termed urban fantasy, but with the same outlook. Modern Africa is a mix of the high tech and traditional beliefs (the same could be said of modern Singapore, modern Britain). The animals and the magical gifts they bring allow her to explore the world of muti, African folk beliefs which continue in a world of email scams and disposable mobile phones.

Nyangas and sangomas and faith healers with varying degrees of skill or talent, broadcasting their services on posters stuck up on telephone poles and walls. Some of them are charlatans and shysters, advertising cures for anything from money woes to love-sickness and Aids with muti made from crushed lizard balls and aspirin. Guess which ingredient does all the hard work?

To South Africans the animals are another form of muti, as are the abilities they give their humans. December’s view of the world is a modern South African view, influenced in part by animist tradition surviving into a Christian and increasingly secular age. In truth she doesn’t particularly understand how magic works, but then she probably doesn’t understand how her car works either (since car control systems went largely electronic, few people do).

Object muti is easy, particularly when it’s based on a simple binary. Locked or unlocked. Lost or found. Objects want to have a purpose. They’re happy to be told what to do. People less so. […] Most magic is more abstract. Capricious. It has a tendency to backfire. And the big stuff they promise, the Aids cures, bigger penises or death spells, are all placebo and nocebo, blessings and curses conjured up in your head. Not unlike glossy magazines, which also promise a better sex life, a better job, a better you. Trust me, I used to write those articles. And just look at me now.

The worldbuilding here is done to an extent by stealth – characters don’t spend time explaining their everyday world to each other (a common fault in much other SF). The result is that you pick up the details as you go along, and Beukes is good enough at her craft to ensure this doesn’t become confusing.

Beukes’ world convinces on its terms then, but that isn’t of itself enough to make a good novel. For me, where Beukes’ fiction really shines is her evocation of contemporary urban South Africa. She’s tremendous at capturing noise, smells, the clash of colours and the sheer energy and chaos of it.

Everything takes on a muted quality fifteen floors up. The traffic is reduced to a flow and stutter, the car horns like the calls of mechanical ducks. The skyline is in crisp focus, the city graded in rusts and coppers by the sinking sun that has streaked the wispy clouds the colour of blood. It’s the dust in the air that makes the Highveld sunsets so spectacular, the fine yellow mineral deposits kicked up from the mine dumps, the carbon-dioxide choke of the traffic. Who says bad things can’t be beautiful?

Though this next quote reminded me more of when I used to live in Earl’s Court, showing perhaps that in some ways major cities are the same the world over.

I catch a taxi into Auckland Park with the late-night cleaners, the nurses and the restaurant dish-washers: the invisible tribe of behind-the-scenes. I get off after Media Park and walk up to 7th Street with its scramble of restaurants, bars and Internet cafés. Outside the Mozambican deli-cum-Internet café, a hawker tries to sell me a star lantern made of wire and paper and, when I decline, offers me marijuana instead.

Beukes also often shows a nice turn of phrase. I liked an email-scam mark having his good sense overwhelmed by the smell of money which “bellows like a vuvuzela, drowning out the whisper of doubt.” Similarly I enjoyed a teenaged boy “pouting like he ordered strippers for his birthday and got clowns instead”, and in terms of imagery when a fatally wounded man “screams like a slaughterhouse pig in a Peta video” it’s vivid and unpleasantly easy to imagine.

What makes Zoo City such an enjoyable read then isn’t the concept itself, clever (and capable of so many allegorical readings) as it is. It’s the writing, the noirish characters, and perhaps most of all that remarkable sense of place. I’ve not read most of the novels Zoo City was up against in 2011, so I can’t say whether it deserved to beat them or not. I’m not at all surprised though that it got shortlisted, because if science fiction (or fantasy if you prefer) was producing many books like this back in 2011 it must have been an exceptionally good year.

Zoo City has been widely reviewed. There’s an excellent (and spoiler free) example at David H’s blog, here (I only just realised David’s blog wasn’t on my blogroll, so I’ve promptly corrected that) and he links in turn to fine reviews from John Clute and Niall Harrison each of which is definitely worth reading. I was happier with the ending than David was as for me the book always had that crime heritage overlapping with the SF and I was therefore expecting a fairly plot-driven ending.

Postscript: Some issues with the Kindle edition

Finally, a note of caution for those who don’t have this and might be thinking of picking it up. Beukes uses different fonts in places, to indicate emails or internet chats, and all that inevitably gets lost in the kindle version. Much worse though the kindle version, in the UK at least, has some truly appalling formatting errors which were so frequent and so bad that they started to genuinely spoil the book for me.

Since I knew the author was on twitter I dropped her a line there asking if there was some way to get the ebook version fixed (the paperback doesn’t have these problems). She put me in touch with her publishers, who asked me to email through the details of the problems I’d found (since they apparently weren’t in all e-editions in all countries).

The publishers offered to send me a cleaned up version, but before they could Lauren Beukes herself very kindly emailed me a word version of the book which was entirely error free (and which was apparently a later version of the book, fixing a plot problem I’d already read past without noticing that her French translator had picked up).

I really can’t praise enough Lauren Beukes’ and her publishers’ response to the problem I had. Given though the formatting issues with the ebook, and the fact that even once fixed you’ll still lose the font choices Beukes makes, this is one you should definitely read in physical copy if at all possible.