Stealing a man’s wife, that’s nothing, but stealing his car, that’s larceny.

They threw me off the hay truck about noon.

Frank Chambers is a drifter with itchy feet who needs a meal. Nick Papadakis, “the Greek”, runs a roadside diner and needs a handyman. Nick’s wife, Cora, is a lot younger than he is and is starting to regret a marriage she made for security rather than love. 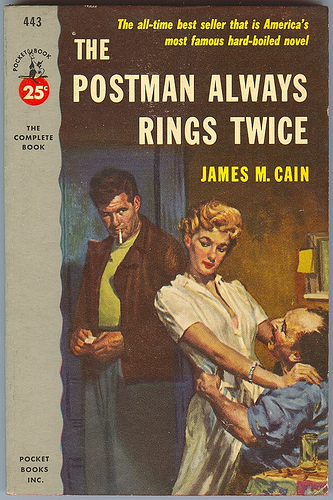 That’s not the cover I have, but it captures the book well so I thought I’d use it.

At first, Frank’s got no plans to stick around. He just wants to grift some lunch and get on his way.

Then I saw her. She had been out back, in the kitchen, but she came in to gather up my dishes. Except for the shape, she really wasn’t any raving beauty, but she had a sulky look to her, and her lips stuck out in a way that made me want to mash them in for her.

Half an hour later Frank has a job, Nick has someone to help round the diner and Cora has a lot more reason to start questioning her marriage.

This is classic noir territory. A man, a woman, somebody in their way. On their own Frank and Cora aren’t saints, but neither is malicious. Frank’s a petty crook and womaniser, but nothing worse than that. Cora is smouldering frustration in a dress, but she’s resigned to the life she chose. The Greek? He’s a nice guy, none too bright, who loves his wife and has small dreams for his diner.

I didn’t realise until I came to write this post that almost every quote I picked was describing Cora. The novel is written from Frank’s viewpoint, and it captures beautifully Cora’s dangerous allure for him. There’s some lovely phrasing here, such as “When she spoke, it was in a whisper that sounded like a snake licking its tongue in and out.” Cora is Eve and serpent both. Frank doesn’t have a chance, but then nor does Cora, and certainly not the Greek. Nobody does.

Nobody sets out here to do anybody any harm. It’s just the situation. Frank and Cora have a connection, they have chemistry. In a very noir sense they’re just unlucky. Frank would rather just walk, but how do you walk from this:

She got up to get the potatoes. Her dress fell open for a second, so I could see her leg. When she gave me the potatoes, I couldn’t eat.

Soon Frank’s convincing Cora to leave Nick, but that would mean being poor and she’s not up for that. The diner isn’t much, but it makes money and run well it could make more. The only thing in their way is the Greek …

I’m not going to spoil the plot for those who’ve not seen the 1946 movie (Lana Turner on top form). All I’ll say is that Frank and Cora know that people will get suspicious if the Greek dies and they’ll likely get investigated for it, so they come up with a plan for the perfect murder. Do Frank and Cora though sound to you like the kind of people who can do anything perfectly?

I hadn’t seen the movie, so the story was new to me. It’s obvious from the opening that Frank and Cora are going to end up trying to kill Nick, but where that leads and how it comes to poison them I hadn’t anticipated at all. This is as much a psychological novel as a noir one. Are Frank and Cora in love, or just in lust? Nick loves Cora and counts Frank as a friend, so how do Frank and Cora trust each other given that they each know the other is perfectly capable of killing someone who wanted nothing but good for them?

Postman is tightly written coming in at around 114 pages in my version. It doesn’t need more because Cain packs depth into the detail. Nick is referred to through most of the book as “the Greek”, but of course this is Frank’s viewpoint and Nick stands in Frank’s way. Is it any wonder he prefers to objectify him? To give him a noun instead of a name?

Similarly, it’s easy to see Cora as a femme fatale, and of course she is but that’s a question of perspective too. If Cora were narrating Frank would be an homme fatale, an attractive stranger who won’t let her push him away and gets her thinking things she might otherwise never have thought. If Frank just left and never came back Cora would be unhappy, but she wouldn’t be dangerous.

That’s perhaps the most noir thing about Postman. This is a black hole of a novel where weak people do terrible things because none of them have the strength to resist their situation. This is a novel of an ugly crime carried out by small people. It’s brilliant, and if you have any interest in the noir genre at all you owe it to yourself to read it.

27 responses to “Stealing a man’s wife, that’s nothing, but stealing his car, that’s larceny.”