he was but the ruin of a man

I read Ethan Frome on my kindle, and finished it on a sunny day. Part of it I read while walking down the street. It was dazzlingly bright and warm, hot even. I meant to buy a bottle of water on my way to the station, and suddenly realised I’d walked past the shop. Looking up I was momentarily surprised to find it wasn’t dark, wasn’t cold. That’s a cliché, but it’s still true. 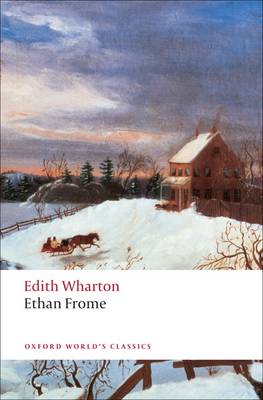 My first Edith Wharton was Age of Innocence, and I absolutely recommend that as a first novel to try by her. It’s an incredible book. It naturally formed my image of her writing, and my impression is that it’s not too false an image – a novelist of blighted and frustrated lives choked by propriety and convention; of the constraints of the upper middle classes of late 19th Century New England and New York.

In a sense all that is true of Ethan Frome, save the class element (the characters here are mostly the rural poor). This though is a more gothic tale, eschewing strict realism for a mood of fear, horror, even loathing. As I read it I found it created a near overwhelming sense of dread, and all without a single supernatural element. The ingredients here are ice, isolation, long-held secrets, disfigurement, ruin and death.

The story comes with a framing device, where an unnamed narrator takes an interest in a poor farmer by name Ethan Frome. Frome is a solitary, lame figure crippled by some terrible accident. He is tacit, private, and people prefer not to speak of his misfortune. The narrator though is invited to Frome’s home to shelter from a storm, and from there is able to piece together Frome’s history.

“That’s my place,” said Frome, with a sideway jerk of his lame elbow; and in the distress and oppression of the scene I did not know what to answer. The snow had ceased, and a flash of watery sunlight exposed the house on the slope above us in all its plaintive ugliness. The black wraith of a deciduous creeper flapped from the porch, and the thin wooden walls, under their worn coat of paint, seemed to shiver in the wind that had risen with the ceasing of the snow.

Years before Ethan Frome was a young man married to an invalid wife, Zenobia. Zenobia had nursed Frome’s mother as that woman lay dying, and upon their marriage had promptly fallen ill herself. Ethan and Zenobia had little money but even so had taken responsibility for a destitute cousin of Zenobia’s, who now helps out around the home. Zenobia, “though doubtful of the girl’s efficiency, was tempted by the freedom to find fault without much risk of losing her”.

The cousin is Mattie, a pretty girl full of all the life that Zenobia is lacking. Frome’s marriage is a pitiful thing, dogged by poverty and his wife’s constant complaints regarding ailments which appear more psychological than real. Mattie comes into this wasteland like a blaze of colour, red scarfed, red ribboned, and of course red lipped and cheeked.  She laughs, and her laughter is a miracle in Ethan’s life long burdened by illness and care.

Starkfield, Ethan’s home town, spends six months a year surrounded by snow and winter. It is a hard place with a puritan past. Red then is the colour of life, but it’s also in this context the colour of shame, perhaps even of adultery. Mattie’s life stands in vivid contrast to Starkfield itself, where the barren silence of Ethan’s home is echoed in the bleak landscape surrounding him, penetrating him. Ethan is frozen, early ambitions for education and escape long since abandoned. Mattie though gives hope of life.

They walked on in silence through the blackness of the hemlock-shaded lane, where Ethan’s saw-mill gloomed through the night, and out again into the comparative clearness of the fields. On the farther side of the hemlock belt the open country rolled away before them grey and lonely under the stars. Sometimes their way led them under the shade of an overhanging bank or through the thin obscurity of a clump of leafless trees. Here and there a farm-house stood far back among the fields, mute and cold as a grave-stone. The night was so still that they heard the frozen snow crackle under their feet. The crash of a loaded branch falling far off in the woods reverberated like a musket-shot, and once a fox barked, and Mattie shrank closer to Ethan, and quickened her steps.

I won’t reveal what happens, though this isn’t really a novel capable of spoilers (it opens with Ethan long crippled, and it’s swiftly obvious too what kind of accident crippled him). The key here is mood, description, the unfolding of a grim inevitability. The writing is absolutely beautiful. So much so that at times it’s almost a difficult read: wintry and steeped in despair. It’s that writing though which makes this so persuasive a book. The plot is arguably a little too neat, a little too deterministic (though Greek tragedies are deterministic and neat in that sense, which doesn’t diminish them any), but the writing makes it true.

The winter morning was as clear as crystal. The sunrise burned red in a pure sky, the shadows on the rim of the wood-lot were darkly blue, and beyond the white and scintillating fields patches of far-off forest hung like smoke.

Edith Wharton is a beautiful writer. It’s easy here to pull apart the elements, tear open the symbolism (images of death, a watchful cat, a red pickle dish which was given as wedding gift but never used, the book is crammed with symbolic elements), but in doing so you’d kill it in the way academic examinations of books can so easily kill them. This is a classic school text, and I’m glad I didn’t read it in school because sitting in a room with thirty other kids crawling between words and discussing layers of meaning suffocates a book. It’s useful, it’s how I learned myself to analyse literature and that’s a skill I value, but the price one pays for that skill is the ruin of the books one learns it with.

Ethan Frome is a slighter affair than The Age of Innocence, but it’s absolutely still worth reading. There’s an old debate about what makes fiction count as literary fiction, as opposed to some other kind. The answer of course is the prose. Few authors write even nearly as well as Edith Wharton.

“Now!” he cried. The sled started with a bound, and they flew on through the dusk, gathering smoothness and speed as they went, with the hollow night opening out below them and the air singing by like an organ.