Packing was always a good time.

Some authors just resonate. Not for everyone. But for their readers. It turns out that I’m one of Bukowski’s readers.

Back in December 2009 I read Bukowski’s first novel, Post Office. I wrote about it here and I ended that review by saying that Post Office was good art. Looking back I’m comfortable with that. It is. 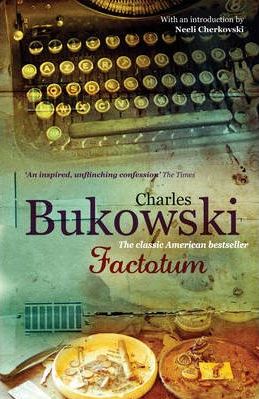 Factotum came four years later and there’s a sense in which it’s more of the same. Henry Chinaski, Bukowski’s alter-ego, wanders through a series of jobs and women not doing any too well with either. He’s mostly broke, mostly drunk and for a smart guy he’s none too smart.

Here’s the opening of the book. If this grabs you the rest will. If it doesn’t then it may be he just doesn’t resonate for you.

I arrived in New Orleans in the rain at 5 o’clock in the morning. I sat around in the bus station for a while but the people depressed me so I took my suitcase and went out in the rain and began walking. I didn’t know where the rooming houses were, where the poor section was.
I had a cardboard suitcase that was falling apart. It had once been black but the black coating had peeled off and yellow cardboard was exposed. I had tried to solve that by putting black shoepolish over the exposed cardboard. As I walked along in the rain the shoepolish on the suitcase ran and unwittingly I rubbed black streaks on both legs of my pants as I switched the suitcase from hand to hand.
Well, it was a new town. Maybe I’d get lucky.

Is it a spoiler to say he doesn’t get all that lucky?

Chinaski isn’t just smart, he’s educated too. He has two years of college behind him (which in one bakery job means he’s instantly promoted to being the guy who shovels coconut flakes into a machine that then sprinkles them over the cakes coming down the line).

For Chinaski though work is just something you do to make some money. If one job doesn’t work out you just do another (you can tell it’s written in a time of full employment). As far as Chinaski can see all those people around him working hard are just making money for some other guy up the chain. In one sense he’s right. In another sense not so much. They go home after all to something better than no dinner and wine so cheap you have to hold your nose to get it down.

The problem is the price paid. As Chinaski observes, “… it wasn’t enough to just do your job, you had to have an interest in it, even a passion for it.” That still holds true. Chinaski’s willing to trade his time for money. What he’s not so willing to do is trade who he is for it.

Like Post Office before it Factotum doesn’t have much of a plot. Chinaski gets a job, lazes around or turns up drunk and gets fired. He hooks up with women, but he doesn’t treat them too well and they don’t treat him much better. One, Jan, recurs through the book and is the closest he has to a serious relationship. Neither is faithful.

What makes all this more than just depressing is the writing and the honesty. Bukowski can write. Here’s two examples. In the first he’s ill and just been brought some soup to feed him back up:

I took the salt and pepper, seasoned the broth, broke the crackers into it, and spooned it into my illness.

In this second he describes a woman in a bar.

She was desperate and she was choosey at the same time and, in a way, beautiful, but she didn’t have quite enough going for her to become what she imagined herself to be.

What struck me about that first quote was its economy, coupled with that lovely and slightly poetic final image. The prose starts matter of fact, transparent and flat. Each action is clearly described and then there’s a burst of movement as broth flows down into an illness-fuelled appetite.

The second quote caught my attention for its pity and unsparing understanding. It’s desperately sad. There’s a certain compassion there, but more there’s a recognition of fact. A lack of sentiment.

Lack of sentiment is critical to Bukowski. I grew up, as I’ve probably mentioned before, on a council estate in London with my immediate parents (mother and step-father) unemployed. Bukowski writes about things I recognise from those days. He and Jan make what they call “pancakes” which are just flour and water mixed together and heated up. When I was a kid they were heated on the back of a frying pan. They’re cheap. Better if you have any butter left at all.

Chinaski and Jan use newspapers as lavatory paper, something else I remember from childhood. It saves money and you can collect them free as people throw them out. One of their big treats is a stew they make when they have a little bit of spare cash. They get vegetables, a bit of meat, and make up a huge pot of broth which lasts them for days. We did those. I looked forward to them hugely as you’d eat well for a good two or three days and the whole house would be filled with the rich smell.

The point here isn’t merely to describe what it’s like to be poor (more precisely what it’s like to be what was once called the undeserving poor, and is now called different things though the concept remains very much with us). The point is looking straight at what is and writing it down.

Bukowski’s gaze isn’t objective. No gaze can be. It is though honest and it’s as much so when examining Bukowski himself (Chinaski I should say, but the line is a thin one) as it is when it looks at anything else.

On a final note, among the many things I read as a teenager were the Beats. Kerouac, Ginsberg, and of course Burroughs. Bukowski didn’t regard himself as a beat writer and I wouldn’t argue that he was wrong in his self-assessment. There are clear links though. A continuation of a conversation perhaps.

There’s a sense in modern mythology in which guys like Bukowski are heroes. He refused to compromise, on paper anyway (I have no idea if he did in life, though my impression is not a huge amount). His novels are highly autobiographical and the contempt Chinaski shows for his jobs and bosses is born of that refusal to settle for what he’s supposed to do and think. In the end Bukowski became an author, poet, screenwriter. That gives his life a narrative. It’s that which makes him seem heroic.

The truth is though that there are many, many Bukowskis. Many Chinaskis. Many people of both genders who go through life not compromising and accepting poverty and failure as the price of that. The difference is Bukowksi had talent, and of course a degree of luck. Chinaski is partly him, but he’s also all the Bukowskis who didn’t make it but who lived the same life anyway.

21 responses to “Packing was always a good time.”