Nothing he did was too blatant.

Family Heirlooms is a fascinatingly twisty little novella that explores the tensions between the public and the private – surfaces and underlying realities.

Maria Bráulia Munhoz is the still-wealthy widow of the esteemed Judge Munhoz. She now lives in a small apartment with her lifelong ladies’ maid. Their only regular visitor is her nephew who acts as her personal assistant. Recently she tasked him to sell off some of her jewellery including a priceless ruby which was an engagement present bought for her by the judge long years ago. The nephew returns hesitant with the news that the jewel is a fake. 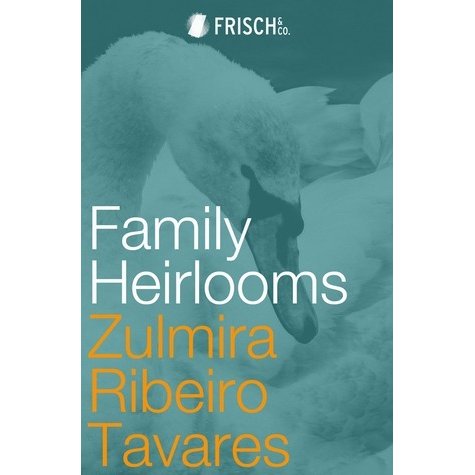 Immediately my mind turned to fraud on the nephew’s part. I’ve read too many 19th Century novels to trust impoverished young secretaries entrusted with managing others’ fortunes. What follows though is actually much slipperier than that. Here’s how the novel opens:

Maria Bráulia Munhoz, on the ninth floor of her apartment building in Itaim Bibi, is getting ready for lunch. The table is set for two people: her and her nephew. The tablecloth on the small, round table is damask and white linen and in the centre there is a lake that is also small and round, mirrored. On the surface of the mirror rests a Murano swan.

Maria Bráulia, certainly advanced in years though her age is undeclared, affixes to her face her second face, the “social” one—her movements sure and quick, accompanied by little pats—with its skin somewhere between rose and ivory, pink mouth and cheeks. Eyelashes with mascara sharpen the blue of her eyes and brighten the dyed yellow of her hair. With her social face once again on show, the other one, the strictly private one, recedes, as happens every morning, and is immediately forgotten by its owner.

That Murano swan has been with Maria Bráulia for many years. It’s one of the core symbols of the novel – an image of flawless perfection reflected in an artificial lake. It is Maria Bráulia’s life, or at least seen from outside it is.

It soon becomes apparent to the reader that the nephew’s revelation may not actually be news for all Maria Bráulia’s outraged protestations. Many, many years ago when the judge was first courting he bought Maria Bráulia the ruby as a gift. It was an astute move on his part for Maria Bráulia’s family were both wealthier and more prestigious than his own and yet with that one priceless present he removed all suggestion that he could be a fortune hunter.

Judge Munhoz being the austere man he was, and well-to-do but not really rich, his gesture was received by Maria Bráulia’s family, who were truly rich, with a solid fortune that had been born of the fabric industry, and whence the other jewels had come, the tourmaline, the topaz, the pearls, the two diamonds, etc., as a touching proof of love.

As soon as she’s finished showing the ring off to her family, literally the same day, he has her remove it and whisks it away returning in its place a paste replica. The original he explains is too valuable to wear here and there. Instead she should wear the imitation while the original remains safely locked away. When she tells her family they see this as further proof of the gem’s rarity; only the most exceptional of stones could merit an imitation of such quality.

The ruby is not the only imitation. The young judge has among his personal staff a muscular young physiotherapist from whom he takes personal instruction in his darkened office. The marriage produces no children and the judge seems almost to push Maria Bráulia into the arms of the family jeweller. On the surface and by any society standard the marriage is a tremendous success. However, like the ruby, it is best admired without too close an inspection.

Family Heirlooms has a rather mannered and often elliptical style which at times can become a little too convoluted for its own good. Another ruby later enters the story – this time a gift from the jeweller to Maria Bráulia as token of their hidden love. That ruby’s value is in part due to an inclusion within it which gives it an added fire and lustre; it’s a technical fault which nonetheless enhances the whole. I think perhaps Tavares’ writing is like that here. It sometimes borders on overwriting but it matches the subject matter and so gives the novella a slightly intoxicating quality that clearer language might lose.

The inclusion is also of course another metaphor. Here that’s rather spelled out by the jeweller as he uses a conversation about his gift to seduce Maria Bráulia:

“Now, Braulinha, your marriage is a little like this ruby. You and I both know what it’s like. It contains a little inclusion (The physiotherapist-secretary! Maria Bráulia deduced, ecstatic), you and I both know what that is. (It’s him! it’s him!) So let us then take advantage of the inclusion and use it to produce a lovely star-effect. (Oh God!) I think you understand me, Braulinha. (Oh Christ, Christ.)

The judge meanwhile lines his study with full-sized portraits of heavyweight boxers showing their admirable limbs and torsos. He is happy, Maria Bráulia is happy, the physiotherapist is happy and so too is the jeweller. All this and since everyone is discreet society is happy too.

Family Heirlooms is often slyly funny. There’s a lovely running joke where the judge points out in passing Maria Bráulia’s lover’s facial resemblance to an old painting of Queen Victoria. Cruelly the comment has some truth and once she’s aware of it Maria Bráulia can never quite get the image from her mind.  By way of another example take this description of the judge’s death from a stroke:

And so it was that life, like a great heavyweight champion, perhaps even the champion most admired by Munhoz, Joe Louis, the Detroit Destroyer, appeared one more time, unexpectedly, and with a second, definitive jab, straight to the chin, knocked him out.

The judge’s death is followed shortly after by generosity on Maria Bráulia’s part when she gifts the secretary a pair of diamonds in memory of her husband and by way of unwritten bequest from him. The secretary never realises that although they look impressive they are among the less valuable of the family jewels. Nothing can be trusted here but everything looks as it should.

There is more but it’s a short work and I don’t want to spoil it. I read Family Heirlooms in one sitting and enjoyed it thoroughly. Since then it has if anything grown in memory. It’s funny, astute and often unexpected. Apparently Tavares is well-known and well-regarded in Brazil and with this as taster for her work I can see why.

I should mention that Family Heirlooms is available as an ebook only. While I appreciate many dislike ebooks, and much as I would like to have a physical copy of this myself to return to, in this case I’d suggest you make an exception as if nobody reads the ebook I doubt there’ll be future physical editions.

Tony of Tony’s Reading List reviews this here and is worth reading as always. I’d also flag these rather good reviews by A Year of Reading the World here, Vulpes Libres here and Necessary Fiction here. If you know others please feel free to link to them in the comments.

Tony suggests that the moral of the piece may be that life is too precious to merely guard and hide away. There is a suggestion in the silence and aridity of Maria Bráulia’s apartment that she may have squandered opportunities and allowed her life to become as hard and reflective as the rubies which have defined it, the passion of her life near-hidden as an inclusion deep within the surface respectability.

On the other hand, for a woman of her class and situation I’m not sure she does too badly. She is, at minimum, complicit in her life and for a woman who starts as a thing to be traded (again like the rubies) she does at least carve out a measure of her own existence and finds both companionship and love (even if not in the same man). Tony’s right though that her life is fairly circumscribed.

Did Maria Bráulia waste her life? Perhaps, but if so I don’t think entirely so.