Desolation tries to colonize you.

I grew up on horror. My early loves were (of course) HP Lovecraft; the now underappreciated James Herbert; Stephen King; Peter Straub; Brian Lumley; William Hope Hodgson; M. R. James; Robert R. McCammon; Guy N. Smith with his series of novels about giant man-eating crabs invading Britain; the magnificent Ramsey Campbell. There were many others, now largely lost to me.

The contemporary horror authors shared some characteristics. Their stories were generally set in locations familiar to their readers. They contained healthy dollops of sex and lovingly detailed acts of appalling violence.

The threats were rarely personal to an individual but more often involved entire towns or countries facing madness or atrocity. Particularly with the British authors body counts tended to be high.

Hodgson and James offered more classically supernatural ghost stories (though Hodgson’s The Night Land was a much more curious beast). Enjoyable, but lacking the visceral thrills offered by the contemporaries. Both had a nice sense of how fear could come from the mere presence of the uncanny.

Lovecraft though, and to an extent Campbell, they were different; their horrors stranger. Instead of conjuring fear with ghosts or hostile creatures or scenes of pain and death they instead went existential. The terror here was that the world no longer made sense; that it never had. 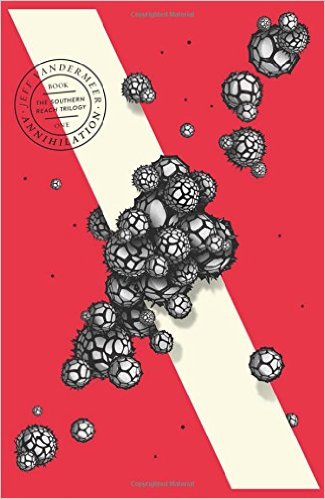 Jeff VanderMeer’s Annihilation is the first of a trilogy, published in full during 2014. It’s not a long novel, but it is a resonant one. It’s very, very good.

The biologist is part of a team of four sent into Area X, together with the anthropologist, the surveyor and the psychologist. The linguist didn’t make it through processing. They’re all women, the thought being that perhaps that will somehow help in Area X. They’re not the first expedition.

What is Area X? That’s not quite clear. It’s a zone where the world isn’t as it should be. There were previous expeditions, the last one including the biologist’s husband. People who enter either don’t come back at all or come back changed. Whatever is in Area X is alien and dangerous.

Names are left behind. Crossing over to Area X involves passing through some kind of boundary and the effects are psychologically devastating, so the expedition members pass through under hypnosis waking on the other side armed with post-hypnotic commands and considerable uncertainty as to their own mission.

Almost immediately they discover something the biologist names a tower and the others a tunnel. It’s a large disc with steps penetrating deep into the earth. It’s not on their maps. Within they find cryptic and ominous writing growing in fungal form from the walls, written by who knows what. It’s so close to their camp that it must have been known about, so why wasn’t it mentioned?

The tower, which was not supposed to be there, plunges into the earth in a place just before the black pine forest begins to give way to swamp and then the reeds and wind-gnarled trees of the marsh flats. Beyond the marsh flats and the natural canals lies the ocean and, a little farther down the coast, a derelict lighthouse. All of this part of the country had been abandoned for decades, for reasons that are not easy to relate. Our expedition was the first to enter Area X for more than two years, and much of our predecessors’ equipment had rusted, their tents and sheds little more than husks. Looking out over that untroubled landscape, I do not believe any of us could yet see the threat.

The expedition begins to break down. The biologist finds she’s become immune to the psychologist’s post-hypnotic suggestions after inhaling some spores, but does that mean that her experiences are more real than the others or less? Is she escaping programming or hallucinating?

This is a strange and slippery novel. The reader is rapidly as unmoored as the biologist and the other expedition members. The characters here have lost their names, can no longer be certain of their past, can’t even agree on what they’re seeing and hearing. The psychologist tries to control them with her hypnotic trigger-phrases, but there’s no control to be had either for her or the reader.

As the biologist realises she can’t trust her team-mates or, after inhaling those spores, herself she comes to realise that she also can’t trust the people who sent them in. The expedition’s goals don’t make sense given what must have been known about the tower, and the hypnosis seems to have left none of them with any clear idea of how they’re supposed to leave once they’re done.

The map had been the first form of misdirection, for what was a map but a way of emphasizing some things and making other things invisible?

Perhaps the best thing to say about Annihilation is that I genuinely don’t know how to describe it. It’s an insidious and disquieting novel. It evokes a sense of dread, but of what isn’t always entirely clear. As the biologist delves deeper into Area X she encounters signs of what may have happened to those who went before, but the uncertainty is the true horror here.

At times VanderMeer does seem to be making quite deliberate homage to other works. The whole concept is clearly in part at least inspired by Roadside Picnic, though you could easily read this without having read that. Similarly, the following passage where the biologist visits an abandoned village contains imagery strongly (and I suspect intentionally) reminiscent of William Hope Hodgson‘s famous horror short The Voice in the Night:

But in what had been kitchens or living rooms or bedrooms, I also saw a few peculiar eruptions of moss or lichen, rising four, five, feet tall, misshapen, the vegetative matter forming an approximation of limbs and heads and torsos. As if there had been runoff from the material, too heavy for gravity, that had congregated at the foot of these objects. Or perhaps I imagined this effect.

One particular tableau struck me in an almost emotional way. Four such eruptions, one “standing” and three decomposed to the point of “sitting” in what once must have been a living room with a coffee table and a couch—all facing some point at the far end of the room where lay only the crumbling soft brick remains of a fireplace and chimney. The smell of lime and mint unexpectedly arose, cutting through the must, the loam.

If you’ve read the Hodgson it resonates with that, but if you haven’t it still works and in any event it’s certainly not mere pastiche. VanderMeer is master of the disconcerting detail – here that smell of lime and mint which in a way is more horrifying than just the suggestion that something terrible happened here and to the people in these houses.

In the end it becomes evident that horror isn’t intrinsic to Area X and nor is it restricted to it. The world is worse than inimical, it’s unknowable. As the biologist concludes:

Our instruments are useless, our methodology broken, our motivations selfish.

Annihilation is a rare example of genre fiction that I’d potentially recommend to non-genre readers. It’s well written and its effects linger uncomfortably long after you’ve closed the final page. I’m looking forward to reading the second and third in the trilogy.

None in the blogs I normally follow that I’m aware of, but please feel free to alert me to any in the comments.

Edit: Kaggsy alerted me in the comments to a very good review by Annabel Gaskella which is here. Lee also alerted me to this review by Trevor, which I thought I’d read and commented on but looking back I think I may have missed entirely.