What we won’t do to hang on to a relationship that’s slipping away from us, an image of fading love.

The Disappearance of Signora Giulia, by Piero Chiara and translated by Jill Foulston

Back in 2009 the director Carol Morley made a documentary about Joyce Carol Vincent, a woman who lay dead in her apartment for a month before anyone discovered her. Morley explored how a woman who had had friends, a good job, a life, could somehow slip through the cracks and at less than forty years of age find themselves dying without anyone noticing they were gone.

There’s nothing in the plot or characters of The Disappearance of Signora Giulia that brings Joyce Vincent’s story to mind, and referencing Joyce Vincent is in no way a spoiler for anything in this book. The connection is of mood: a haunting sense that something important has happened but without knowing exactly what or how; of having questions to which there may never be an answer. 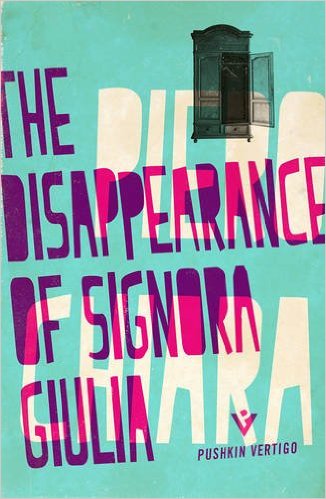 It’s 1955, Northern Italy. Giulia is a beautiful woman married to a much older man, the respected lawyer Esengrini. Every Thursday morning she takes the train to Milan to visit their daughter. One Thursday she doesn’t arrive. Back at home there are signs of a robbery, and there’s no evidence she ever even got on the train. She’s vanished.

Esengrini asks Commissario Sciancalepre to look into the case. Both men suspect the visits to the daughter may have been cover to an affair, but did Giulia run away or did something happen to her?

‘Sciancalepre, you’re a southerner and can understand certain things better than I can. I can’t say that I’m not up to it, but I’m definitely getting there. In recent years, our twenty-year age difference has really created a gap between my wife and me. Did you notice that even though our rooms are next to each other, they’re separate? It’s been like that for more than a year. Signora Giulia wants nothing more to do with me in bed. She says that for me, bed is a branch of the office: I read trial proceedings, take notes and look through legal journals until late. I’m sixty, you know, and I’m like any other sixty-year-old man. But my wife is only thirty-eight, to be exact…’

It doesn’t take long for Sciancalepre to find evidence of adultery, a possibly criminal matter in post-Fascist Italy. The clues however soon dry up and the case becomes unsolved. Years pass, with the question of what happened to Signora Giulia nagging at Sciancalepre. Eventually Esengrini and Giulia’s daughter grows up and comes into her trust fund and possession of the house where Giulia was last seen, which brings new evidence into light and means Sciancalepre may be able to solve the greatest mystery of his career after all.

Sciancalepre makes a likable protagonist. He’s intelligent and sympathetic, but professionally sceptical and he’s quite aware that Esengrini might only have initiated the investigation in order to divert suspicion from the possibility of his own guilt. Better yet however, Sciancalepre is thoroughly Italian:

They started their search in the office. At twelve-thirty the operation was suspended for lunch. Sciancalepre couldn’t do without his pasta,

This is a slim novel, just 120 pages or so, and yet it has enough twists for a book easily twice its size. I guessed around the three-quarters mark who must have done it, and sure enough Sciancalepre duly arrested them, but the novel doesn’t stop there and more complex questions of proof and guilt arrive undermining both my and his certainty. The novel becomes slippery and truth elusive.

Disappearance partly draws on the cosy crime and locked room mystery genres (there’s no locked room here, but there is a puzzle about how exactly Signora Giulia disappeared on that otherwise ordinary Thursday morning). Neither are genres I care for, and I’m not therefore a particularly good reader for this book. Even so, I enjoyed it and I think it makes an interesting addition to the Pushkin Vertigo lineup as it’s ultimately a disquieting and unexpected read.

Beyond that, it’s hard to say much without spoiling it for others (which hopefully the small discussion I’ve had here won’t do). It’s short and cleanly written and translated and if you’re anything at all like me it’ll still trouble you after you’ve turned the final page. What more could one really ask for?

I was sold this by reviews from David Hebblethwaite at David’s Book Blog, here; and from Guy Savage at His Futile Preoccupations, here.