a Muscovite in Harold’s cloak?

Eugene Onegin, by Alexander Pushkin and translated by Tom Beck

How does one review a work like Eugene Onegin? It’s not that I’m nervous writing about classics, but Russian novels in verse which are so important they created a genre? That’s a big ask. Nabokov wrote an entire commentary on the poem, and a famously literal translation. Where to start?

Well, if there’s a point to blogging it’s to record a personal reaction. I’m frankly not qualified to speak to any technical aspects of Eugene Onegin. It’s only because I looked it up on Wikipedia that I know it’s in something called iambic tetrameter (and then I had to look up what that was). This then will not be an academic critique; it won’t be an analysis of the poem and its place in Russian literature. This is simply my reaction to a book written around 180 years ago in a language I don’t speak and in a style I’m unfamiliar with. I’m already thinking about reading it again. 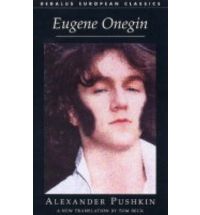 Back in 2010 I read Lord Byron’s Childe Harold’s Pilgrimage, written in the second decade of the nineteenth Century. I enjoyed it, but I didn’t read it for its own merits. I read it because without it there wouldn’t be a Eugene Onegin. Pushkin’s Eugene Onegin is the bridge between the European romantic tradition and the later Russian concept of the “superflous man”. That makes it sound of mere historical interest, but Pushkin is far too good a writer for that. This is a delicious novel, still well worth reading.

Eugene himself is a young man about Moscow as the novel opens. He’s a womanising dandy waiting for a long-sick uncle to die so that he can inherit. Here’s how Pushkin introduces him:

Completing service long and faithful,
his father ended his career
and left his son debts by the plateful
from having given balls each year.
And yet my friend was saved from Hades
by his Madame, a Gallic lady;
and then Monsieur took on the lad,
a lively child but never bad.
Monsieur l’abbé, who hated quarrels,
thought learning ought to be a joy,
tried not to overwhelm the boy.
He didn’t bother him with morals,
and if annoyed, he didn’t bark,
but took Eugene to Letny Park.

When Eugene grew and first felt passion,
was plagued by love and hope and doubt,
they did what’s always been the fashion
and threw the wretched abbé out.
My friend was free from every pressure,
could live and act as was his pleasure,
so he was always finely dressed
in what was surely London’s best.
He spoke and wrote French to perfection,
bowed constantly, his hair well curled,
and when he danced he turned and twirled,
his light Mazurka no exception.
He didn’t have too long to wait
before the world thought he was great.

Eugene’s a dilettante. He spends his evenings at the theatre and at balls, his days at leisure. He has no need to work, and no enthusiasms beyond those custom would applaud. He has taste, or at least a sense of fashion. He is also, however, quite criminally bored:

Alas! His feelings were now cooling,
he wearied of the social round,
the constant flirting and the fooling
now seemed to him absurd, unsound.
Pursuing beauties now fatigued him,
betrayals, friends no more intrigued him,
nor guzzling beefsteaks, Strasbourg Pie,
champagne until the day you die,
dispensing piquant sayings, grimace,
and bicker, have an aching head
from everything you’ve done and said.
Although he was a fiery scapegrace,
he’d lost his love of having fun,
of sabre-fighting and the gun.

As Pushkin goes on to say, “Childe Harold-like, he was ill-humoured”. This is of course classic territory (what do you expect? It’s a classic). A bored young blade looking for some means to alleviate his ennui, even before Byron this wasn’t an unfamiliar character. Laclos would have recognised him. Coming just 15 years after Byron’s creation though the source is even more obvious. It’s a point which raises another question: if Harold was as many thought Byron’s thinly disguised autobiography, is Eugene actually Pushkin?

56
Oh flowers, love, you fields and meadows,
Oh idleness, yours is my soul;
I’m not Eugene, we’re different fellows,
that matters to me on the whole
in case some too sarcastic readers
or other bookish, slanderous creatures
should callously compare my quirks
with those of Byron and his works,
as if I were but merely scrawling
my effigy, just like that proud
fantast, as people put around
so shamelessly, (which I find galling),
as if we wrote of nothing else
but poems all about ourselves.

If I hadn’t thought of the question already it would be firmly in my mind after that denial. Pushkin’s well aware that readers will be looking at this wondering if it’s really about him. His narrator, who is of course also a character within the novel, loudly denies that he’s Eugene – “we’re different fellows”. The narrator’s a garrulous sort though, and he can’t resist throwing his own comments into the text, reflecting on how Eugene’s life reflects upon his own and generally digressing.

That split, between Eugene as protagonist and the narrator as meta-character, is what makes this so much fun. Eugene’s story is pretty straightforward. He leaves Moscow and goes to the country, where a young and innocent girl falls in love with him and where he becomes friends with a local poet. During his stay misunderstanding and lack of thought lead Eugene to commit to a duel which ends, as duels in Russian literature generally do, to tragic consequences. In case you don’t know the story I won’t say more, but knowing it wouldn’t harm the book any. Pushkin’s not aiming to surprise the reader with plot twists here.

While all this is happening the narrator is revealing his own character. His acerbic asides reveal his own past romantic misfortune, his loss of fashion and his world-weary cynicism. As with the Tales of Belkin what at first seems to be a framing device becomes as important as what it’s framing. Pushkin, on the strength of the two books I’ve read so far anyway, is an incredibly playful writer.

I’m conscious I’m quoting a lot in this review, but I’m keen that readers get a decent chance to see the style as it appears in Tom Beck’s translation. This isn’t a full stanza, but it’s a nice illustration of how the narrator (Pushkin within the fiction) lets his own character slip into the text:

He had a chaste and upright conscience,
which he quite guilelessly laid bare,
Onegin found that he could share
his friend’s naïve and heady nonsense,
emotions which, however true,
are not exactly all that new.

All this narrative dexterity is married to a rich vein of social commentary. Pushkin’s aim is as accurate as Onegin’s, and he turns it on Russian society, on earnest Romantic poets, on the superfluous men of Eugene’s generation, even on some public figures which (as the end-notes make clear) his contemporaries would have recognised. As so often country folk come out as better than anyone else, but then the myth of the pastoral idyll is always with us (and even that is shown here as stultifyingly dull).

This is the first time I’ve read Eugene Onegin, so I can’t compare Tom Beck’s translation to others. My impression is that a straight translation of Onegin is essentially impossible. The original poetry was innovative and unique, and translating it means making a choice between exactly how faithful you are to the exact meaning of the language and how faithful to the structure and style.

Tom Beck is a musician by training, and that shows here in a translation which emphasises flow over precision. It’s not that he writes his own text (I did compare the opening stanza as it appears in several translations and Beck isn’t rewriting as such), but he wants to keep the poem as a poem and since direct English equivalents of the original Russian words wouldn’t fit the sructure it’s fair to say there will be translations which hew more closely to the original meanings (Nabokov of course being the most striking example).

Meaning though is only part of being faithful. Beck preserves the feel of the poem, he preserves its rhythm and that too is a form of fidelity. Translating fiction is like interpreting music. Two orchestras performing the same piece will each give it their own stamp. Prokofiev’s Alexander Nevsky when performed by say the London Philharmonic becomes the London Philharmonic’s Alexander Nevsky by Prokofiev. It’s still Prokofiev, but it’s no longer purely Prokofiev.

Is this then a good translation? Well, yes, because I read it and enjoyed it and I felt the movement of it and left wanting to read more. Is it the best translation? Best for whom? Is it a worthwhile translation? Yes, because fidelity to structure is no less valid than fidelity to meaning. There were occasions when I found a rhyme jarred slightly (else and ourselves for example, above) or where I lost the rhythm for a moment and had to reenter the poem. After the first few pages though I found the verse as natural as prose, and if you’re to have any hope of reading a book like this that’s critical.

I’ve long been a fan of Dedalus Press, so when I saw they had their own version of Eugene Onegin I had to give it a try. I’m glad I did, and I hope others will too. This is a lively and fun book, tragic and witty and clever enough to leave many ambiguities unresolved (if the end of The Sense of an Ending left you frustrated this one really isn’t for you). Russian literature has a (undeserved) reputation for being heavy, depressing and difficult. Eugene Onegin is none of those things.