The sound of a motorhorn separated us like thieves.

Bonjour Tristesse, by Françoise Sagan and translated by Irene Ash

It’s nearly a month now since I read Bonjour Tristesse, but the memory of it still cuts through the books I’ve read since. It’s no surprise this was a massive hit when first published; it’s delicious. 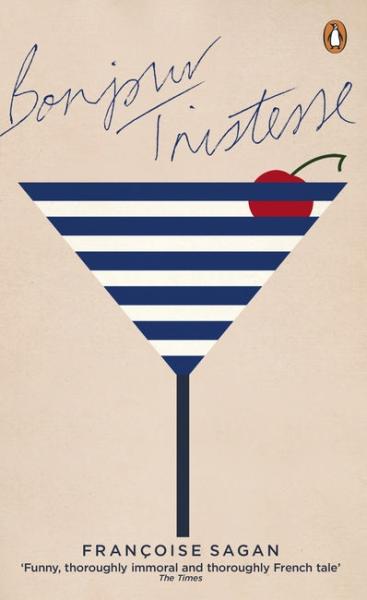 Now that, that is a good cover. Brilliant even.

Cécile, “seventeen and perfectly happy”, is on holiday with her father, “a frivolous man, clever at business, always curious, quickly bored, and attractive to women.” They’ve taken a villa on the French Riviera and it’s no wonder she’s so happy, for she’s her daddy’s darling and she’s young, pretty and rich. “I dare say I owed most of my pleasures of that time to money; the pleasure of driving fast, of having a new dress, buying records, books, flowers.”

Her father’s current mistress is staying with them, Elsa, “a tall red-haired girl, sensual and worldly, gentle, rather simple, and unpretentious; one might have come across her any day in the studios and bars of the Champs-Élysées.” Cécile, emulating her father, idles her time away with Cyril, a university student who is “tall and sometimes beautiful, with the sort of good looks that immediately inspire one with confidence.”

The holiday is a sojourn in paradise. Everything is perfect, for Cécile anyway. Her days are awash with confident, spot-free adolescent sensuality.

The first days were dazzling. We spent hours on the beach overwhelmed by the heat and gradually assuming a healthy golden tan; except Elsa, whose skin reddened and peeled, causing her atrocious suffering. My father performed all sorts of complicated leg exercises to reduce a rounding stomach unsuitable for a Don Juan. From dawn onwards I was in the water. It was cool and transparent and I plunged wildly about in my efforts to wash away the shadows and dust of the city. I lay full length on the sand, took up a handful and let it run through my fingers in soft yellow streams. I told myself that it ran out like time. It was an idle thought, and it was pleasant to have idle thoughts, for it was summer.

Then however comes the “amiable and distant” Anne – “At forty-two she was a most attractive woman, much sought after, with a beautiful face, proud, tired and indifferent.” Elsa has youth and enthusiasm on her side, but Anne is in a different league. Educated, sophisticated, possessed of unquestionable taste, Anne is the epitome of bon chic, bon genre. Elsa hasn’t a hope against competition like that.

Soon Elsa’s out and Anne’s firmly in, and Cécile’s at first delighted since she likes Anne and perhaps aspires one day to be like her. Then it dawns that Anne has quite clear ideas about the kind of life she wants, and about the desirability of father and daughter leading a carefree existence of sun and pleasure (and Anne has a point, given that Cécile frequently wakes up with a hangover).

Worse yet, Cécile’s father seems actually serious about Anne, she’s not just another lover, she’s genuine competition for his interest and affections. Quite quickly Cécile decides she wants Anne back out, and the easy-going Elsa back in the picture.

The Times’ quote on the cover refers to the book as “thoroughly immoral”, but I don’t think that’s quite right. Instead I’d say it’s delightfully amoral. Cécile is like a less innocent Emma, arranging the lives of those around her in accordance with her views of how things should be, but unlike Emma she’s working to her convenience rather than their perceived benefit. In a way Cécile is something like a cat, attractive and affectionate but essentially self-interested.

Sagan was 18 when she wrote this and in part that shows. The emotions here are big emotions, this is (as the old Hollywood cliché goes) a summer that Cécile will never forget and it’s all rather dramatic. We’re definitely not in Colm Tóibín-type territory here where nothing much happens, slowly.

Bonjour Tristesse is a novel of surfaces, perhaps also reflecting Sagan’s age. Everyone here is pretty much as they appear to be, the only person with any ulterior motives is Cécile and we know those as she’s the narrator (and she’s a reliable narrator). This isn’t a novel where you’ll be spending ages considering possible meanings, symbolism and themes, it is what it fairly plainly is. That’s ok though, because it’s not trying for that kind of depth and it succeeds marvellously at what it does try for, at evoking an immediacy of experience.

The next morning I was awakened by a slanting ray of hot sunshine that flooded my bed and put an end to my strange and rather confused dreams. Still half asleep I raised my hand to shield my face from the insistent heat, then gave it up. It was ten o’ clock. I went down to the terrace in my pyjamas and found Anne glancing through the newspapers. I noticed that she was lightly, but perfectly, made up; apparently she never allowed herself a real holiday. As she paid no attention to me, I sat down on the steps with a cup of coffee and an orange to enjoy the delicious morning. I bit the orange and let its sweet juice run into my mouth, then took a gulp of scalding black coffee and went back to the orange again. The sun warmed my hair and smoothed away the marks of the sheet on my skin. I thought in five minutes I would go and bathe.

I love that quote. There’s a tremendous intensity about the sun and the coffee and the orange. Even a month later it still resonates with me, and when I think of this book that’s what I think of, Cécile sitting in the fierce sun gulping scalding black coffee and biting into an orange. It’s character made manifest through breakfast.

To an extent Bonjour Tristesse reminds me of Les Liaisons Dangereuses, which is high praise given that’s one of my favourite novels of all time. It has that same sense of people playing with others’ lives without troubling themselves as to the damage they might do in the process. It has that same sense too of revelling in sheer physical pleasure and a heedlessness born of privilege without responsibility.

In case it’s not obvious I distinctly enjoyed Bonjour Tristesse. I had meant to buy the Heather Lloyd translation (I don’t recall why), but the Irene Nash was the one in stock when I went to Foyles so that’s what I read. I can’t of course compare the two translations, not having enough French and more importantly not having read both, but the Nash was a fluid read that didn’t once jar me with apparent anachronisms or odd turns of phrase so I’d have no hesitation at all in recommending it (though that doesn’t mean of course it’s good, for all I know the French text is packed with anachronisms and odd turns of phrase after all).

I’m not aware of any other reviews of this in the blogosphere, but if I’ve missed any please let me know in the comments.