the town below looking as hell might with a good electrician

My Face for the World to See, by Alfred Hayes

In a way murder makes things easy. When someone’s been killed, is going to be killed, it creates instant tension. It’s why TV dramas are so full of bodies – tune in after the break to see if the killer can be caught before he strikes again!

What’s trickier is creating that same sort of tension from the everyday. Soaps and potboiler  novels both do it by filling their characters’ lives with furious incident. A woman learns that her husband is sleeping with her sister, while at the same time her daughter has developed a drug habit and her mother dementia.

Alfred Hayes on the other hand, Alfred Hayes shows the quiet desperation of a life that isn’t quite what you wanted it to be. In the foreword to the NYRB edition of My Face for the World to See film critic David Thomson says that “Hayes is the dry poet of the things we think about while lying in bed, when sleep refuses to carry us off.” It’s an astute observation. My Face is a sort of love story, or a chronicle of a relationship at any event, but it’s one of those relationships you later regret and that really, you never should have started. 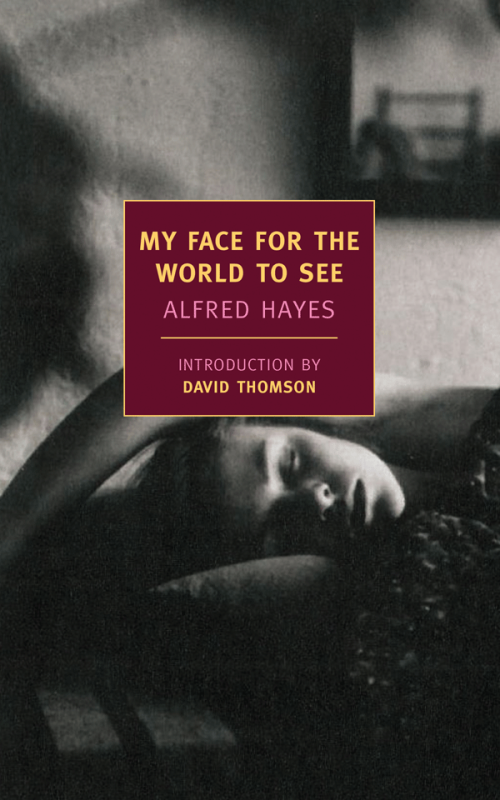 IT WAS a party that had lasted too long; and tired of the voices, a little too animated, and the liquor, a little too available, and thinking it would be nice to be alone, thinking I’d escape, for a brief interval, those smiles which pinned you against the piano or those questions which trapped you wriggling in a chair, I went out to look at the ocean. There it was, exactly as advertised, a dark and heavy swell, and far out the lights of some delayed ship moving slowly south.

The ocean’s there all right, “exactly as advertised”, but there’s something else too – a girl walking into it wearing a yachting cap and carrying a cocktail glass. He thinks she’s drunk, perhaps cutting a pose for people exactly like him who’re looking on from the house. Then he realises it’s not that at all. She’s committing suicide.

He saves her, and they begin an affair. Hayes doesn’t give either of their names, lending them a sort of anonymity and ubiquity both. The man’s a scriptwriter with a wife back in New York and a stale marriage. He’s a Hollywood insider but he takes no joy in it, describing himself to her at one point as “writhing” not writing. “I was a member, I said, now, of the Screen Writhers Guild.” He spends his evenings at parties filled with “people who were not entirely strangers and not exactly friends”.

She’s no happier, no more fulfilled. She came to Hollywood dreaming of becoming a star, her face on billboards for the world to see. It didn’t work out that way.

Hayes’ Hollywood is a town filled with surface people. Put like that it doesn’t sound too insightful (who ever portrays it as a town filled with great thinkers and warm human beings?), but it’s how he captures it that makes this such a powerful novel. My Face is only around 130 pages long, but it’s so tightly and effectively written that it covers more in that space than many writers do in five times that length.

In a way My Face has an almost noir sensibility. That’s not because there’s any great criminality in the book, but rather it’s that combination of consuming desire with an utter absence of hope.

What’s the alternative though, to all that frustrated longing?

The protagonist is having an affair because his wife’s away and it passes the time, and perhaps too because that’s the part society has written for him. The woman’s motive isn’t any better. She knows he’s married. She knows it won’t last. There’s a sense that she’s with him because he’s there, because it takes less resistance to be with him than not to be with him.

I just talked about motives, but I’m guessing them. His are easier to guess because the novel’s written from his perspective. Her’s are harder, because he never fully sees her. She’s surfaces, like the whole town, generically pretty and with little to distinguish her in his eyes from a hundred other would-be-stars except this one he knows, this one he saved from drowning. If the novel were written from her perspective I suspect in some ways it might be very different, but then perhaps not because it’s far from clear she sees him any more deeply than he does her.

I’ll end with one final quote. I had more quotes from this novel than I could possibly use in this review, and it was genuinely hard choosing which ones to leave out as Hayes has so many telling asides and observations. This one though I just had to keep, because it’s beautiful and terribly sad, the entire novel therefore in microcosm:

There was a noisy rush of water from the bathroom, and she appeared, ready for the evening, a smile she had chosen, I thought, from a small collection of smiles she kept for occasions like this, fixed upon her face.

This is a brilliant, brilliant book. It’s another great find by NYRB, one of the best publishers out there. It’s an absolute gem. There’s a school of thought that says that reviews shouldn’t express opinion, that they should avoid the thumbs up/thumbs down simplicities. It’s not a school I subscribe to. Thumbs up.

If you’re interested in reading more about this book, I first learned of it fromGuy Savage’s review, here (though if you read my blog the odds are you read his too, and if you don’t you should). As so often I owe Guy for a wonderful find. While writing this up I noticed that Guy had picked almost exactly the same quotes as I had. I try to avoid reading other people’s reviews at the time I’m writing my own, but when I’ve finished mine it’s always a comfort to see that someone else made similar choices. It suggests that if I have missed the point of a book, I have at least missed it in company.

There’s also an excellent review by Nick Lezard at the Guardian, here. Nick’s reviews are always good, particularly given he writes for a newspaper book section. Professional reviewers should of course leave bloggers in the dust in terms of analysis and insight, but sadly they very rarely do. Nick’s one of the exceptions (James Wood is another).