So, in the hope of turning over a newish leaf, here’s the first of my monthly reading round-ups for 2020.

Water Shall Refuse Them, by Lucie McKnight Hardy

My first read of 2020 was in fact mostly read towards the end of 2019, but I count these things by when I finish a book. I wanted something well suited to long, dark nights and winter cold. I decided therefore on a bit of folk horror.

Water is certainly folk horror, but it’s not really a winter read. It’s set during the famous summer heat wave of 1976 and the whole book is prickly with long airless days and trapped sweat. It’s a dark coming of age novel, with a family on holiday following the death of the youngest child.

Nif, the teenage narrator, is quite clearly disturbed as shown early on when her toddler brother falls over skinning his knee, at which point she rubs gravel painfully into the other knee to ensure balance. Her mother is near-catatonic; her father is failing to cope.

Unfortunately, the Welsh village they move to for a month’s break has its own tensions. A local religious sect has a running feud with the family’s new neighbours, among them a teenage boy Mally who becomes Nif’s one friend but who may be even more damaged than she is.

It’s claustrophobic and well paced, and while I worked out the reveals and direction of travel fairly early I think that was intentional. Although I’ve tagged it as horror there’s nothing really supernatural here – it’s people that are the real danger.

I should caution that the book contains multiple scenes of animal cruelty. Nif’s traumas are often inflicted on the helpless around her and the book doesn’t turn away from that.

As a rule I dislike state of the nation novels, and I have no real interest in Brexit novels. It’s lucky then that And Other Stories sent me a subscription copy of this as I’d otherwise never have read it.

Paul is a 30something East London hipster, living in a decrepit but cheap apartment and filling his time with casual sex and drug-fuelled parties. He writes for a low distribution style magazine, contributing a barely read book page (his real passion) and a popular haircut street-photos page (which is why they allow him the book page). Otherwise he funds his limited lifestyle by working in what is quite evidently a thinly disguised version of the London Review Bookshop.

He’s a classic man-child protagonist, but Theft is set in 2016 and just as Britain faces an existential crisis of sorts so does Paul. He interviews reclusive cult author Emily Nardini and falls in with her, her much older husband Andrew and their 20something Guardian-column writing socialist daughter. Paul’s mother has recently died, so he spends his time shuttling between East London, Emily Nardini’s Holland Park home, the LRB, and his North-East England childhood home which he and his sister are trying to sell.

All this allows Brown to contrast the new and old establishments, London and the North, Remainers and Leavers, haves and have-nots. It’s often very funny, and Paul while never really an unreliable narrator isn’t the most self-aware either.

Theft captures a generation whose future seems to have been misplaced. Andrew sees Paul as a kind of creepy cuckoo who has somehow intruded into his family’s life for no clear reason. Paul in turn profoundly resents Andrew, seeing him perhaps as having everything Paul would want for himself, but realistically won’t ever have.

Theft is well written, has strong characters and somehow manages to avoid taking sides (particularly when it presents the views of some of Paul’s old school friends still living in his home town). It captures something of the crisis of our times, particularly the failure of many men to adapt to a changing world, and a generation’s loss of the future their parents grew up expecting.

William Gibson’s “Blue Ant” trilogy is set in the then present day of the early 2000s and follows various characters impacted by the Blue Ant advertising agency and its profoundly strange guerrilla marketing campaigns.

Gibson is of course famous for writing cyberpunk novels, in particular 1984’s Neuromancer. With the Blue Ant trilogy there’s a definite sense of him saying – this is it, we’re now in the future I’ve always written about.

I read the second of the trilogy, Spook Country, back in December and I wouldn’t normally read the third so soon after. However, Dominic Cummings famously wrote a blog shortly after I finished Spook Country calling for government to recruit people like two of the characters from Pattern Recognition and Spook Country. I figured I’d better read Zero History before he wrote another blog and potentially spoiled the ending for me…

Here we’re reunited with the characters from the second book, former indie pop singer Henry Hollis and now-recovering drug addict Milgrim. They’re tasked to find the source of a new denim brand which is being eagerly sought after by those in the know but has absolutely no marketing behind it (stealth marketing it’s called).

What follows is fun and very Gibsonian, mixing up street fashion with military procurement and high-tech intrigue. I enjoyed it even though I wasn’t absolutely sure there was a point to every part of it, I liked spending time in Gibson’s strange view of what is after all our own world, and the exploration of subterranean forces underpinning consensus culture was interesting.

Taken as a whole the trilogy is I think a success – it says something about how networks and deep information flows impact our times that few other novels achieve. At the same time I suspect it could have been a bit sleeker and the hyperwealth the characters all dwell within (even if borrowed for most of them) creates a distance that slightly diminishes the effect. It’s our world, but it’s a very privileged slice of our world.

The Godmother, by Hannelore Cayre and translated by Stephanie Smee

I saw this in a Daunt Books and bought it the same day. It’s a noirish tale about a police translator who uses the information she gains listening in to police transcripts to intercept a drugs shipment and become a wholesale dealer – mostly so she can pay her elderly mother’s nursing home fees.

It’s hugely fun. Patience Portefeux, the pragmatic protagonist, is motivated mostly by a sense of life passing her by and crushing financial obligations than any desire to be a criminal mastermind. Fortunately for her though most of the dealers she’s working with are idiots and who would suspect a slightly dull-looking middle-aged woman of being the fabled Godmother the police are now searching for?

I don’t want to say too much more. There’s actually some surprising depth here in the exploration of Patience’s now-demented and previously distant mother and the motivations of the family who produce the drugs Patience intercepts. It’s very, very good. If you read one book from this roundup, well, it should probably be Theft to be honest but this is also a pretty good contender. 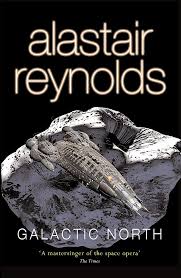 This is a short story collection I’d been reading in bed over a couple of months and finished in January. It’s set in Reynolds’ Revelation Space universe. I’ve long liked Reynolds, but this wasn’t his best collection for me. If you already know him you’ve probably already read this and there’s lots to like here. If you don’t already know him this isn’t where I’d start.

And that’s it! Watch this space for a February roundup in due course… I’ll also see if I can get at least a couple of illustrative quotes from the book, which for some reason I didn’t note in January.