Why can’t we kill thoughts the way we kill people, with a gun?

Hecate and her Dogs, by Paul Morand and translated by David Coward

I first discovered Paul Morand through the Pushkin Press release of his wonderful memoirs, Venices. Sure, he skipped the period where he actively supported the Nazis and embraced fascism, but what memoir is wholly reliable? Morand’s sentences were art even if his life left much to be desired.

His novel The Man in a Hurry is flawed but beautifully written. Morand excels at the silken sentence and at coolly elegant prose (one of his books is a record of conversations between him and Coco Chanel, another fashionable fascist). 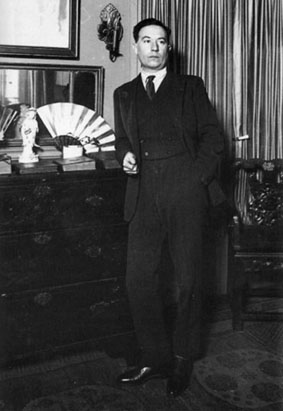 Hecate and her Dogs was published in 1954 during Morand’s period of post-war rehabilitation. It tells the tale of a colonial bank official in the 1920s who finds himself so suffocated by boredom that he embarks on an affair. That in itself is not unusual but his choice, Clotilde, proves to be anything but ordinary

In that kingdom of the vacuous, she seemed at first just another blank; everything about her lacked lustre. She wore a beige suit – simple, perfect. Her movements, so contained, barely initiated, that slightly broken voice, the uncertain colour of her eyes, the delicacy of her physique, all gave her an air of orphaned vulnerability. Women thought her ravishingly beautiful because her looks happened to conform to the current fashion: turned-up nose, eyes like a cat’s, head too small for her body, round shoulders, no hips, flat chest, long Merovingian feet, slender arms which did not spoil the line of her jackets, slim thighs which enhanced the hang of her skirts. … Clotilde was grace personified.

I love that line about “that kingdom of the vacuous”. At first it looks like the narrator (he’s never named) has chosen wisely. Clotilde is elegant and discreet and her husband is absent. The affair flourishes.

The first half of this novel follows the narrator and Clotilde as their relationship deepens without ever becoming so serious as to threaten propriety. Short chapters, each generally no more than a page or two long, slide easily by as do their days together. The text is spiced with seemingly effortless epigrams which help wash it all down:

Love is horribly time-consuming; which is why it flourishes best in the provinces;

Words are for people who have nothing to say to each other.

The initially Calvinist narrator becomes suffused with sensuality, drunk with it. Here is the entirety of chapter twelve:

We wallowed and rolled in the trough of a depression caused by the confluence of two vast air flows, one oceanic, the other continental. Whenever the wind dropped, we felt light-headed, as if one of the four elements had suddenly gone missing. We surrendered to the daily hurricane which always began with the sun and ended with it.

We had allowed ourselves to be blown along towards our as yet still distant fate, up to our eyes in happiness.

I was dazzled by the freedom of our love-making and the joys of sinfulness. I felt light as a feather. I had never hoped to feel light; it came as a great surprise and gave me intense pleasure. I floated down rivers of milk and honey, dazed by the blueness of the sky, deliquescent in our all-dissolving existence.

The fatma would leave our dinner trays outside. The postman slipped the post from my bank under the door. The phone stayed off the hook. We never got out of bed, lathered in our own odour which coated our skins like toad spittle. We knew each other’s bodies by heart; in the dark, we ran our hands over their every detail, the way the blind read Braille. Our sheets were heavy with the carbon dioxide we exhaled; the only air I breathed in was the air which Clotilde breathed out; she still had the delectable breath of the very young.

An entire week’s indulgence is a sign that things may be getting too serious. The narrator’s staff begin to complain that he hardly ever turns up to work any more. Head office are becoming angry at the absence of proper management. The whole affair is becoming a problem. It will get much worse.

Near the half-way mark in the book the narrator and Clotilde go to the cinema. The show includes a short documentary piece about some orphan children. Clotilde becomes strangely excited and unexpectedly and loudly orgasms. The narrator is aghast – what could there be in such a film to so excite her?

From there he’s obsessed that there is a part of her sexuality he’s failed to reach. Soon he’s convinced that she is a peerless predator effortlessly able to take advantage of the impoverished children so common in the colony. Rather than reject her he decides to match her.

Hecate becomes an exploration of a descent into vice and obsession. Morand alludes rather than describes so it’s often difficult to work out exactly what may have happened, and this is exacerbated by the narrator’s tendency to take what may well be Clotilde’s masturbatory fantasies as literal truth.

In a sense it doesn’t matter whether Clotilde is the predator the narrator takes her for. Whether reality or fantasy, she has an aspect of her sexuality beyond his control and he can’t bear that. He has to have her entirely even if that means embracing the appalling.

Hecate and Her Dogs is a prime example of the decadent novel. Chapter thirty-seven reads in its entirety:

But I was beginning to need that disgust more and more.

The novel is written in hindsight so we know throughout that what we’re reading is an account of “the worst years of my life.” As the narrator’s business affairs fall apart, and his conduct becomes too extreme to continue to ignore, the small world of colonial society turns against him. His position becomes unsustainable.

What’s noticeable here is that the narrator never blames himself. He’s a man who literally abuses children and yet who somehow manages to blame that on Clotilde. Whether she did the same or not is irrelevant to his own guilt.

If the narrator is amoral so too is his society. Nobody cares about his conduct until he loses all discretion and restraint. As the narrator remarks to himself: “When there is a mad woman in the attic, does it not matter less that she is mad than that she stays in the house?” What a morally bankrupt statement that is.

In his review in The Guardian Nick Lezard speculated as to whether the narrator’s guilt is a metaphor for Morand’s own guilt for his wartime activities. I’m not persuaded. Partly as the narrator doesn’t show any particular guilt and partly as Morand’s main regret about World War II seems to have been simply that his side lost.

What lifts Hecate and Her Dogs above being a rather pruriently hysterical tale of colonial debauchery and ruin is Morand’s subtlety and skill. I said above that Morand alludes rather than describes and of course that’s necessary for a book like this to be published (particularly in 1954). However, beyond that it also creates a complicity in the reader.

The narrator imagines the details of Clotilde’s believed vices and the reader has to do the same. Similarly, the narrator’s rather formal description of their passion has to be thought about to be understood at which point the reader too has become part of it. Morand makes us all collaborators.

Here‘s the Nick Lezard review I mentioned above. Otherwise, the much missed Kevin from Canada wrote a typically excellent review of this here. Kevin says that “in many ways Hecate and Her Dogs is a masterpiece”. I’m honestly not sure if I agree or not but it’s definitely at least arguable that it is.

7 responses to “Why can’t we kill thoughts the way we kill people, with a gun?”