something about the darkness of the streets has a meaning

Voyage in the Dark, by Jean Rhys

This is England, and I’m in a nice clean English room with all the dirt swept under the bed.

Rhys is the poet of hypocrisy and unspoken disapproval. Voyage is the third in her series of four novels exploring the experience of women facing the indifferent cruelty society reserves for those who don’t quite fit. 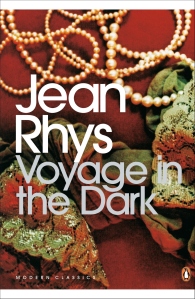 Anna Morgan is a teenager recently come to the UK from the Caribbean. Her father died and her stepmother pointedly had no place for her, so to England it was. It’s not a voluntary homecoming, or any kind of homecoming at all for that matter. Anna loved the Caribbean, the warmth and colour of it. She was mostly raised by her family’s black housekeeper and (to her stepmother’s disgust) played with the mixed race children. She sees blacks as “warm and gay”, whites as “cold and sad”, which given she’s white says more about her than it does about race relations.

Anna finds England a dismal and dispiriting place. She works as an actress, barely surviving. Her outlook is bleak, as reflected in this quote where she sees a couple kissing:

A man and a girl were leaning against the railings in Berwick Square, kissing. They stood without moving in the shadow, with their mouths glued together. They were like beetles clinging to the railings.

There’s a lot to pull out there. “A man and a girl”, already a power imbalance. That image of their mouths glued together which seems to me somehow nauseating and nauseated. Then the beetle imagery. Anna isn’t a romantic. Except, of course, that she is. How can you be 18 and an actor and not be a romantic?

Anna shares a room with her friend Maudie, also a showgirl. While walking one evening they meet two men who pick them up and buy them drinks. Anna later goes to dinner with one of them at his club and sleeps with him there. It’s the price you pay for the food and company. It’s expected. He puts money in her handbag before she leaves. It wouldn’t do to give it to her directly, she’s not a prostitute after all.

The man is Walter and Anna’s relationship with him is inherently unequal. He’s older and richer. They meet at his club or other places he chooses. She loves him. He pays her rent. It’s not what Anna was looking for but it’s not as if there’s much better on offer.

Of course, you get used to things, you get used to anything. It was as if I had always lived like that. Only sometimes, when I got back home and was undressing to go to bed, I would think, ‘My God, this is a funny way to live. My God, how did this happen?’

Anna places her hopes on Walter, too young to realise what she is to him. When he dumps her he does so by having a friend write to her (cheque enclosed, naturally). It’s the Edwardian equivalent of dumping someone by text. It’s cowardly, though by his own lights Walter hasn’t behaved badly. Surely Anna wouldn’t have expected him to marry her? He treated her well when they were together, let her down as politely as he could, gave her a reasonable sum to tide her over until she finds another man. What more could he do? All he asks now is that she return any of his love letters that she may have kept so as to avoid potential future embarrassment.

Walter isn’t the only one to treat Anna shabbily. Her landladies judge her; when she visits her family in England they want nothing to do with her; her stepmother’s written her off. Anna has no skills, no contacts, nothing to offer save herself to whatever man might be interested.

In modern parlance Anna is depressed, and Voyage in the Dark is (among the many other things it is) a masterful exploration of depression as lived experience. At night she can’t keep her thoughts at bay, by day she can distract herself until the next night:

But in the daytime it was all right. And when you’d had a drink you knew it was the best way to live in the world, because anything might happen. I don’t know how people live when they know exactly what’s going to happen to them each day. It seems to me that it’s better to be dead than to live like that. Dressing to go and meet him and coming out of the restaurant and the lights in the streets and getting into a taxi and when he kissed you in the taxi going there.

In most books sparrows chirping would be a symbol of hope. Rhys is better than that, smarter. Here the sparrows are just another reminder of exclusion and irrelevance. Depression is a stained glass window all in grey. Everything outside is coloured by it.

The language here brings the reader within Anna’s experience. I opened a page at random while writing this piece and found a chapter beginning as follows:

There were two slices of dark meat on one plate, two potatoes and some cabbage. On the other plate a slice of bread and a lemon-cheese tart.

‘I’ve brought you up the bottle of vermouth and the siphon you asked for,’ the landlady said. This one had bulging eyes, dark blobs in a long pink face, like a prawn.

We move seamlessly from a fairly prosaic description of the meal to the line about the vermouth (which tells us that Anna is drinking) and then to the description of the landlady who has herself become a sort of unappetising food. The text is suffused with disgust. Note too that “This one”. Like the men, the landladies change particulars but not nature.

In a decade or so Anna will be Julia Martin of After Leaving Mr Mackenzie. Both live by sharing their emotions and their bodies with men who’ll move on in due course to something more permanent. Both are honest, but nobody wants their honesty. If they were of a higher social class, if they had money, they could live independently but they don’t so they can’t. That doesn’t leave many options.

At the same time Rhys avoids the simplicity of saying it’s all society’s fault. At one point Anna shares with a woman named Ethel, who tries to make a go of herself with a small business. Anna finds that incomprehensible, turning instead to Maudie and another friend Laurie who live outwardly glamorous and inwardly shabby lives wearing clothes bought for them by the men they go out with. It’s another manifestation of depression – Anna finds it easier to drift and to depend on the men she meets than to adopt Ethel’s puritan work ethic.

Novels about teenagers are usually about learning self-reliance, becoming yourself (whoever that might be), finding confidence and discovering the world. Anna discovers the world all right, but she doesn’t like it much and it doesn’t have much time for her. Later in the novel when she meets another man she reflects “My mouth smiled at him.” It’s a true but chilling line (something I could say of a great many of the sentences here). It’s ok though. He only wants her mouth smiling, that outward show. He doesn’t really care if the smile remains once he leaves the room. They never do.

The two I’d immediately single out are by the Lonesome Reader, here, and by Jacqui of JacquiWine’s Blog, here. Both rightly pick out the same key quote: