One doesn’t step into anyone’s life, not even a dead man’s, without having to live it to the end.

I Was Jack Mortimer, by Alexander Lernet-Holenia and translated by Ignat Avsey

As a kid I used to love the British TV show The Fall and Rise of Reginald Perrin. For those who haven’t seen it Perrin is a moderately senior businessman loved by his family and respected by his colleagues who decides he just can’t face his own life any more. There’s no crisis as such, no determining event, it just gets to the point where he can’t live with the tedium of the everyday.

Perrin fakes his own suicide, but discovers that escaping yourself isn’t as easy as it looks. Ferdinand Sponer would sympathise. 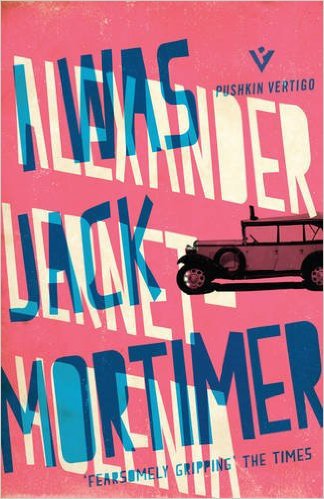 Sponer is a taxi-driver in 1930s Vienna. He has a steady girlfriend and there’s an expectation they’ll marry, but there’s no urgency to it so as yet they haven’t. He finds himself attracted to a young aristocratic woman he picks up as a fare, Marisabelle von Raschitz. She’s beautiful and aloof and doesn’t notice him at all. He tracks her down hoping to make a connection and strikes up a conversation with her. He’s good-looking but he’s not remotely part of her world and while he manages to briefly impinge on her awareness she walks on dismissing him from her life as she might a cat she’d stopped to stroke in the street.

Soon Sponer has picked up another fare. This time it’s an expensively dressed young man of similar age to Sponer himself. To Sponer’s horror when he turns round to ask his fare a question the man’s dead, shot twice. Sponer realised that someone must have leaped on the running board while they were in traffic and that the noise of passing trucks must have masked the sounds of the shooting.

Sponer panics. He fears the police will blame him and so decides to dump the body, but then he realises that once the body is found it won’t take long to discover that the dead man was last seen taking a taxi, and the other drivers will describe Sponer and the police will want to know why he dumped the body. The only answer is to make sure the dead man is seen alive at his destination. Sponer has to become the dead man, check into his hotel and create a visual trail so the police won’t trace the body back to him.

Ok, that makes no sense at all, but it’s the premise of the book. The dead man is Jack Mortimer and Sponer has to assume his identity to cover up his own inadvertent part in Mortimer’s murder. If Sponer were thinking more clearly he’d have realised that people might come to the hotel looking for Mortimer and that impersonating an American tourist isn’t your best idea when you don’t actually speak much English, but if Sponer were thinking more clearly he’d have called the police in the first place and then carried on with his life.

I have a rule for books with unlikely premises – I’ll generally give them one gimme. I think most readers work much the same way. There’s no point reading a book about vampires and getting hung up on the fact there’s no such thing. You have to accept vampires or there’s no book.

Here the gimme is that Sponer decides his best bet is to become Mortimer. You just have to accept that or there’s no book. The trouble is, Lernet-Holenia spends a fair amount of time setting out Sponer’s chain of reasoning and the circumstances that push him in that direction. That makes for a slightly slow start as frankly however much justification is established it still never makes much sense, and the reality is if I weren’t already prepared to accept that outcome I wouldn’t have picked this up. Lernet-Holenia could learn here from Edgar Rice Burroughs. If your book is about the centre of the Earth, there’s really no need to waste too much time describing how everyone gets there.

Once Sponer is Mortimer the book finally kicks into gear. Sponer receives a phone call in his room from a clearly distraught woman, but she calls in English and he can’t understand her. Soon she’s in the lobby and he’s wondering quite what he’s got himself into. To make things worse he’s not considered the point that somebody wanted Mortimer dead and that when they hear Mortimer somehow made it to his hotel after all they might come back to finish the job.

The meat here isn’t whodunnit, but whoisit? As himself Sponer was a nobody, a working class joe making enough to get by but never enough for any more than that. Now he’s staying at a high-end hotel with money in his pocket, and while things start going downhill very fast he’s not just some guy anymore. Ironically, it’s by losing his own identity that he’s finally become somebody.

I Was Jack Mortimer works reasonably well as a thriller, but like a lot of crime fiction the murder and its consequences are just means to an end. Here that’s the exploration of issues of wealth, class and identity. Sponer’s journey through the Vienna night takes him from cheap late-night bars back to Marisabelle von Raschitz’ apartment and much in between and the book is at its best when conjuring up this now vanished Vienna.

Right there on the left was a slot-machine bar. He went in. It was a large, circular, dome-shaped room with slot machines around the perimeter and tables in the middle at which people were eating and drinking. A radio was blaring. He walked past the machines and studied the labels. Over one of the taps was the inscription “Sherry”. He picked up a glass, held it under the tap, and inserted a coin in the slot. The interior emitted a hollow gurgling and spluttering sound, and sherry—somewhat unappetisingly, he thought—gushed from the metal tap into the glass. There are many people who don’t enjoy the luxury of having desert wines served up elegantly. Slot-machine bars are meant for the likes of them.

One of the most interesting parts of the book is that Lernet-Holenia describes every street Sponer drives down and every location he goes into, so that my distinct impression was that if you wished you could walk around Vienna holding a copy of the book and following Sponer’s trail. It’s a classic example of a novel where the city is just as much a character as any of the people.

Where the book works less well is pacing. After that slow start I mentioned the book picks up and becomes a lot more fun, but then at around the half-way mark switches continent and characters so as to explore the background to Mortimer’s killing. Conan Doyle does something similar in A Study in Scarlet where early on the focus moves to Mormon Utah and for a large chunk of the book Holmes and Watson are accordingly nowhere to be seen, with the story returning to them only after it’s fully explored the American backstory to the London crime.

Here Lernet-Holenia does something similar, but it doesn’t work nearly as well as it did for Conan Doyle. Just as I’d really bought in to Sponer and his situation I found myself following a bunch of new characters I didn’t really care about in a setting much less interesting than 1930s Vienna. Fortunately we return to Sponer reasonably quickly and from there the book gets its momentum back, but it’s a distracting midpoint wobble.

I’m at risk by now of making it sound like this isn’t a good book, which would be unfair. It’s not a great book and it has some definite structural issues, but it’s short enough that the digressions never take too long and overall it’s a light and fun read. Sponer’s girlfriend gets involved and helpfully is both more interesting and more sympathetic than Sponer himself, and there’s genuine interest in Sponer’s transformation in the eyes of Marisabelle von Raschitz as his identities ebb and flow.

I’ll end with a final quote. Sponer is attracted to Marisabelle von Raschitz as much for what she represents as what she is. Sponer’s father was an infantry officer but died when Sponer was young, leaving his family to slide into poverty. Marisabelle is part of the world he could have had. Here he visit’s his girlfriend’s family, who live in the world he got instead:

Faced with that, who wouldn’t be tempted to put on a dead man’s clothes?

I Was Jack Mortimer has been widely and well reviewed. Kaggsy of Kaggsy’s Bookish Ramblings reviewed it here, Guy of His Futile Preoccupations here, Tom Cunliffe of A Common Reader’s here and Stu of Winston’sDad’sblog here. I’m sure there are others I’ve missed, and if anyone reading this has also reviewed it please feel free to include a link in the comments.

13 responses to “One doesn’t step into anyone’s life, not even a dead man’s, without having to live it to the end.”