The Killer Inside Me, by Jim Thompson

This is about as black as noir gets. 240-odd pages inside the head of a brutal and manipulative psychopath. Couple that with a scathing critique of small-town American life and it’s a definite and deserved classic, if a rather depressing one. 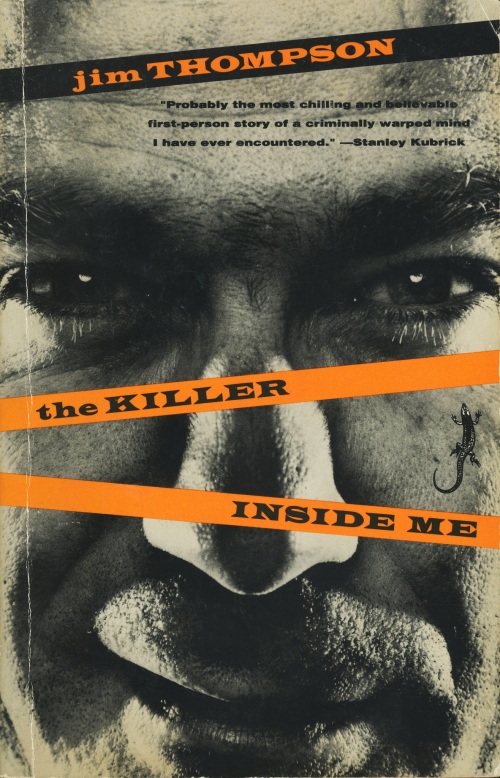 Published in 1952 and set about the same time, The Killer Inside me is the first person narrative of Lou Ford, a Texan deputy sheriff living in the comically misnamed small town of Central City. Lou’s well liked locally and known to all as an upstanding and dependable man, if a little slow and prone to cliché.

From inside though Lou is a very different beast. He’s coldly watchful, observing the world around him analytically but without empathy. He enjoys hurting people but he’s too smart to show it so instead he likes to play with them, like a cat with a mouse it can’t be bothered to eat. In public at least he maintains a plausible cover of virtue at all times:

“Well, I tell you,” I drawled. “I tell you the way I look at it, a man doesn’t get any more out of life than what he puts into it.”

The smile on his face was getting strained. I could hear his shoes creak as he squirmed. If there’s anything worse than a bore, it’s a corny bore. But how can you brush off a nice friendly fellow who’d give you his shirt if you asked for it?

Central City is a Christian town where people work hard and look out for each other, but without prying into one another’s business. Respectability is important here and if you lose your reputation you’re never getting it back again.

Underneath the unruffled surface the town is riddled with hypocrisy. Lou has his girlfriend over regularly to stay the night. Everyone knows they’re sleeping together, but it’s assumed they’ll get married which will make it retrospectively ok, and in the meantime to speak of it would be to ruin her reputation and that wouldn’t be a gentlemanly thing to do.

Similarly, nobody talks of the fact that Chester Conway, local big man around town, might have had Lou’s brother murdered. Lou’s brother had spent time in prison for assaulting a little girl so nobody mourned him too much anyway, certainly not enough to take on the richest man in the area.

Things have been stable for years, but then Lou’s asked to see off a hooker named Joyce who’s set up on the outskirts of town. He ends up sleeping with her instead, able once out of public sight to finally indulge his taste for sadism with a woman who turns out herself to have a taste for masochism.

The trouble Lou now has is that once he’s finally able to let his inner desires off the leash he can’t contain them. He decides he needs to kill Joyce if he’s to keep his own appetites in check but to get away with it he needs someone to blame for her murder, and he needs her apparent murderer to be dead too so nobody can question them too closely, and if that story doesn’t stack up he needs a third body to take the blame for the first two…

It was funny the way these people kept asking for it. Just latching onto you, no matter how you tried to brush them off, and almost telling you how they wanted it done. Why’d they all have to come to me to get killed? Why couldn’t they kill themselves?

Early on in the narrative Lou seems like the kind of genius-psychopath so beloved of modern film and tv. Quite quickly though Lou’s account of himself starts to be undermined. He’s convinced that he’s cleverer than anybody around him and that nobody can see through his cover, but several characters ask him why he pretends to act so hokey or what he gets out of pretending to be stupider than he is. He’s clearly right in thinking himself intelligent, but it’s not so obvious he’s right in thinking that means that everyone else is an idiot.

It’s also not clear that Lou is always as careful as he thinks he is. Early on in the novel a bum asks him for a handout, figuring he’s an easy touch. Since nobody’s around Lou stubs out a cigar on the man’s hand, taking pleasure in casual cruelty. Nobody would believe a bum’s word against Lou’s, but it raises a question about how often Lou steps out of character and indulges his true nature, and if he’s right that nobody ever notices. Central City is after all a town where people keep what they know about their neighbours to themselves.

Lou’s mind is not a nice place to spend time in and Thompson doesn’t shy away from describing Lou’s crimes in ugly detail. Lou kills men when he has to, but he kills women from compulsion and while he might use a gun for a man for a woman he likes to use his fists and his boots.

As the story continues it’s hard to avoid the suspicion that while Lou has a rationale for each of his crimes it’s just that – a rationale. The reality is that he’s a sadistic killer who enjoys hurting women and having power over men and who increasingly can’t keep his impulses under control. Lou reckons himself a careful predator, but he’s more akin to a rabid dog.

Thompson’s first great achievement here is to make Lou’s mind convincing while still keeping him horrific. Perhaps more than that however is how he shows that Lou’s malevolence has gone unnoticed not so much because of Lou’s own cunning but because of his town’s desire not to probe too deeply into matters that might not bear too much public inspection.

Things run smoothly in Central City if respectable people stay respectable, if those on the outside stay on the outside, and if everyone plays along as if the surface of things were the reality of them. Lou undermines that, not just by being a killer, but ironically by not being as good at hiding his inner rottenness as everyone else is.

Guy Savage, naturally, has reviewed this along with many other Thompsons at His Futile Preoccupations. His review is here. Also worth reading is this review by Emma at bookaroundthecorner here. If you know of other blogosphere reviews, please let me know in the comments.

13 responses to “Polite, intelligent: guys like that are my meat.”