‘You have always, I must say, a smooth explanation ready.’

The Maltese Falcon, by Dashiell Hammett

What is there to say about this one? This is as classic as classic gets, and I say that as someone who’s reviewed Don Quixote here. This is one of the ur-texts of hardboiled fiction, source for one of the greatest film noir movies of all time. It’s also bloody good. 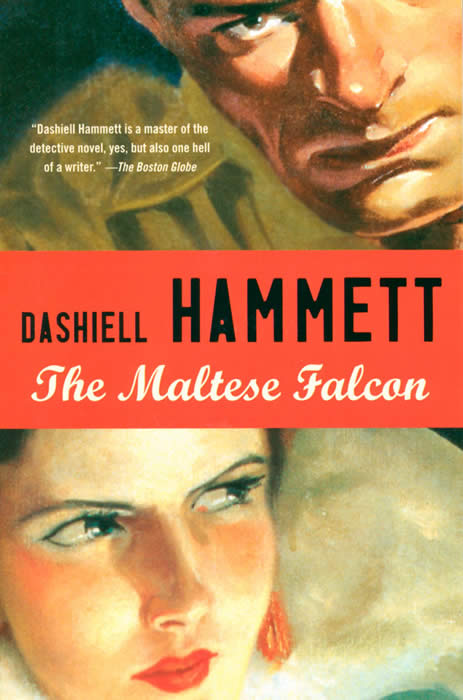 I’ve read The Maltese Falcon before, so while it wasn’t on my #TBR20 list I thought I could allow a read of it while I was in San Francisco last month. How can you not read Dashiell Hammett when in San Francisco? It’s half the reason I wanted to go there in the first place.

Here’s how the book opens:

Samuel Spade’s jaw was long and bony, his chin a jutting v under the more flexible v of his mouth. His nostrils curved back to make another, smaller, v. His yellow-grey eyes were horizontal. The v motif was picked up again by thickish brows rising outward from twin creases above a hooked nose, and his pale brown hair grew down – from high flat temples – in a point on his forehead. He looked rather pleasantly like a blond satan.

Right away Hammett has put Sam Spade front and centre, while at the same time making him slightly questionable. He sounds lupine; he’s “pleasantly like a blond satan” which makes him sound charming but not particularly reassuring.

Moments later Sam’s secretary is showing in a woman named Wonderley, “a knockout”, a femme as fatale as any that ever lived on the page:

She was tall and pliantly slender, without angularity anywhere. Her body was erect and high-breasted, her legs long, her hands and feet narrow. She wore two shades of blue that had been selected because of her eyes. The hair curling from under her blue hat was darkly red, her full lips more brightly red. White teeth glistened in the crescent her timid smile made.

What follows is a dizzying tale of murder, betrayal, and above all greed. Miss Wonderley tells Sam that her sister has fallen into bad company with a man named Floyd Thursby. Now the sister has disappeared, and Miss Wonderley fears Thursby might harm her, even kill her. She wants Thursby watched and her sister brought safely home.

By the start of chapter two Sam’s partner, Miles Archer, has been murdered and the case has become personal. Sam didn’t like Miles any and he was sleeping with Miles’ wife, but even so a man can’t let someone shoot his partner and do nothing about it, particularly when the police start poking around looking for someone to blame. Whatever’s going on, it’s much more than a runaway sister.

‘That – that story I told you yesterday was all – a story,’ she stammered, and looked up at him now with miserable frightened eyes. ‘Oh, that,’ Spade said lightly. ‘We didn’t exactly believe your story.’ ‘Then—?’ Perplexity was added to the misery and fright in her eyes. ‘We believed your two hundred dollars.’ ‘You mean—?’ She seemed to not know what he meant. ‘I mean that you paid us more than if you’d been telling the truth,’ he explained blandly, ‘and enough more to make it all right.’

The Maltese Falcon has some of the finest characters in any crime novel I’ve read. Miss Wonderley is really Brigid O’Shaugnessy, and by her own account in the past she’s been “bad – worse than you could know – but I’m not all bad”. She’s in serious trouble, the worst kind, and she’s dependent on Sam Spade to help her out of it but what exactly it is is far from clear. For a damsel in distress she’s surprisingly hard to get a straight answer from, but then being a knockout is all the explanation she’s ever needed in life.

Sam gets visited in his office by Joel Cairo, a small-boned Levantine dressed in rich clothes and armed with heavily scented handkerchiefs and a small-calibre pistol. Joel’s looking for an ornament, “the black figure of a bird”, and he’s not the only one because the fat man is out there too and he has a vicious street thug bearing twin .45s watching Sam wherever he goes.

The fat man, actually named Gutman, is another memorable character. He’s loquacious, jocular, well mannered and well groomed. He’s appetite in a bulging suit, polite but determined. The thug, a gunsel named Wilmer, is a bitter little killer full of anger and resentment at the world. The two of them make a dangerous combination.

I should at this point make a small aside and note that this is not a particularly gay-friendly novel. Cairo is an effeminate gay and portrayed as ugly and unwholesome in part because of that. Wilmer is a gunsel, a term that today because of this book and the film means a gun-thug but that originally meant a catamite – Hammett used the term so that he could get the gay subtext into the book without being too explicit and it worked so well that when I first read it and saw the film I had no idea of the implications.

Above all of them though there’s the character that’s by far the greatest in the book – Sam Spade himself. Spade changes his mood and his manner to the occasion: dumb when he wants to be underestimated; angry when he wants to intimidate; charming when he wants to persuade; sharp-tongued when he wants to put someone back in their place. He’s quick-witted and poker-faced, and the real crime is that Hammett never wrote another novel featuring him. He is, quite simply, one of the greatest fictional detectives ever written.

The chances are almost everyone reading this knows the plot, the secret of the “black bird” and what’s really going on with O’Shaugnessy, Cairo and Gutman. It’s possible though that some of you may not, and just in case of that I won’t say anything more about what happens. I will say though that while Chandler remains my first and greatest hardboiled love, Hammett knew how to write a plot and the plot here is one worthy of the characters.

This is probably as close to a love-letter as I’ll write in a review, until at least I reread The Big Sleep at which point I’ll likely gush to a level that makes this look restrained. Still, it’s The Maltese Falcon, and to quote Spade from the film in a line he never says in the book, it’s “the stuff that dreams are made of”.

I’ll finish up with a quick comment on the film, which I rewatched while out in San Francisco. It’s amazingly close to the book, with large chunks of dialogue taken straight from one to the other. It’s as well directed as you’d hope from John Huston at the top of his game, but above all it is incredibly well cast.

Bogart of course makes a definitive Sam Spade. He looks nothing like the book’s description of the character, but that simply doesn’t matter as he completely inhabits the part and in doing so pretty much defines the iconography of the cinematic private detective. Mary Astor matches him in a career-defining role as Brigid O’Shaugnessy – a woman who is varyingly vulnerable, bold, affectionate, manipulative, seductive, dangerous, terrified and more.

Sydney Greenstreet seems to have stepped out of the book as Gutman; Peter Lorre is a marvellously questionable Cairo (though I’ve never seen Lorre disappoint); and perhaps most impressive of all is character actor Elisha Cook, Jr who captures Wilmer in all his petty viciousness so well that at times I almost sympathised with him. The supporting actors are equally well chosen, the whole film crackles with talent and is just an exceptional joy to watch.

16 responses to “‘You have always, I must say, a smooth explanation ready.’”