The Yips, by Nicola Barker

I probably wouldn’t have read this but for the #readwomen2014 campaign. I was aware of Barker, but somehow had never been pushed over the edge into actually trying one of her books. Perhaps it’s because she keeps getting longlisted for the Booker, and I don’t hugely rate that prize, or perhaps because I had the mistaken impression that she was a polite author addressing contemporary English middle class concerns.

Well, I can’t speak to her other novels, but The Yips is not polite. Rather, it’s a 550 page funhouse mirror of a book, reflecting back modern Britain but stretched out, distorted, made surreal yet still recognisable. Here’s how it opens:

Stuart Ransom, professional golfer, is drunkenly reeling off an interminable series of stats about the woman’s game in Korea (or the Ladies Game, as he is determined to have it): ‘Don’t scowl at me, beautiful…!’ — directed, with his trademark Yorkshire twinkle, at Jen, who lounges, sullenly, behind the hotel bar. ‘They like to be called ladies. In fact they demand it. I mean …’ Ransom lobs a well-aimed peanut at her — she ducks — and it strikes a lovely, clear note against a Gordon’s Gin bottle. ‘…they are ladies, for Christsakes!’

It’s well past midnight on an oppressively hot and muggy Sunday in July and Ransom is the only remaining customer still cheerfully demanding service from the fine vantage point of his squeaking barstool at the Thistle, a clean but generic hotel which flies its five, proud flags hard up against the multi-storey car park and an especially unforgiving slab of Luton’s Arndale.

‘But why did you change your booking from the Leaside?’ Jen petulantly demands (as she fishes the stray peanut from its current hidey-hole between the Wild Turkey and the Kahlua). ‘The Leaside’s pure class.’

Stuart Ransom, former wild man of the golf tournament circuit, is in Luton for a sponsored photo-op. His career’s in the rough, the money’s gone and he’s taken to referring to himself in the third person. Jen is a 19-year-old trainee beautician and part-time barmaid, but more than that she’s a consummate bullshit artist, a wind-up merchant, she’s a peroxide-bleached spirit of mischief made attractive flesh.

Gene’s also working bar. As Jen explains, he’s survived terminal cancer seven times (though she may be exaggerating) and is working multiple jobs to pay for facial reconstructive surgery for a daughter disfigured in a terrible car crash. He’s a contemporary secular saint, featured in the newspapers for his fundraising efforts, and he’s modest too preferring to keep quiet about his other claim to fame through his uncle who was a world-renowned palm reader and whose gifts Gene may have inherited.

Stuart tries to get Gene into a conversation about whether “he finds Korean ladies hot”, but Gene isn’t the type to talk about women in that way, explaining that “his assessment of the virtues of Korean women – as a unified class – is based entirely on a series of ill-considered – even stereotypical – ideas he has about Eastern women, and he is sure that this is a little stupid – even patronizing – of him because Korean women are doubtless very idiosyncratic, with their own distinct features and dreams and ideas and habits.”

All those rules about how to write? Just look at that quote in the paragraph above, because Barker doesn’t seem to follow any of them. On most any given page there’ll be hyphens and brackets and ellipses and exclamation marks and italics for emphasis all of them liberally sprinkled through the text and by any reasonable standard it should be an appalling mess, and yet somehow it isn’t. The whole book too is crammed with detail and description, much of it utterly irrelevant though lending a surface patina of brand-name gloss over the banal or idiotic (much like modern Britain in other words).

One of them – shorter, heavier-set, in his shirtsleeves, possessed of a dramatic, dark blond comb-over which flaps up and down like a pedal-bin-lid as he runs – clutches a navy blue, gold-buttoned blazer in his hand. The second gentleman is taller, handsome – something of a dandy – wearing cream loafers, cream trousers, cream trilby (a maroon ribbon circling the brim), an expensive, lavender-coloured polo shirt and heavy, arty, dark grey Yves Saint Laurent-framed glasses. He moves with an exaggerated angularity (knees high, arms thrown out) like a stick figure in a poorly executed flicker-book animation. 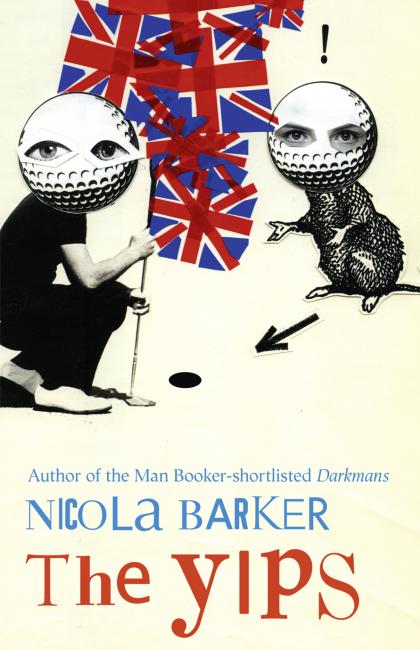 From these characters the book spirals out. There’s Gene’s wife, an Anglican vicar and former feminist who is finding her life increasingly unsatisfying, though her faith in God remains strong (which by the way is incredibly unusual, I don’t recall when I last read a priest character who wasn’t doubting their faith). There’s Stuart’s entourage including his heavily pregnant Jamaican manager who’s one of the last people to believe in him. Later the manager’s sister turns up, an internationally renowned writer on human rights, though before she arrives on the scene we meet a Muslim sex therapist and his ultra-pious wife who converted to the faith.

None of the characters individually are that extraordinary. They’re all larger than life, but any one of them could potentially be the focus of a novel and you probably wouldn’t find them too far fetched. Barker though shovels in character after character, each of them so memorable that despite the massively crowded cast it’s extremely easy to keep track of them.

To the extent The Yips has a plot (and it’s a short extent, you could say it’s “just stuff and then more stuff”) it’s those memorable characters bouncing off each other. Jen is like a self-propelled white cue ball that fires itself down the table causing all the other balls to ricochet around, colliding into each other and ending up in combinations that nobody could have predicted at the start.

The whole thing is a massive Rabelaisian farce. This is a book where at one point Ransome gets into a fight on a giant chessboard, it couldn’t be more artificial, and yet I found myself caring for the characters. Gene seems genuinely a good guy. Ransome isn’t anything of the kind, but you at least become curious what’s going to happen to him. Valentine so clearly deserves better than the desperate situation she finds herself in that it’s hard not to find yourself rooting for her.

Most interesting though is the development of Gene’s wife. First she’s just referred to as a priest, then as “his wife” and only eventually does her name come into view, Sheila. Early on she seems unsympathetic, a drag on Gene who could do better, but the book shifts increasingly to her perspective and her frustrations and passions and the more it does so the more she comes to life, becomes more than priest and wife and becomes Sheila, an actual woman and a character in her own right.

Paralleling this Valentine discovers that she can go outside her home if she wears a niqab and abaya, the traditional Muslim garments covering a woman’s entire face and body. The black cloth becomes a sort of “dowdy, portable, Victorian bathing hut”, a cloth house that allows Valentine to exit the brick one. There’s undercurrents here about the nature of marriage, social restrictions on women, body image, surfaces and concealed interiors, but the points are made lightly and the comic flow isn’t interrupted, or rather is interrupted only enough that the jokes don’t become wearying.

The obvious comparator for all this is Martin Amis, early Martin Amis that is before he became a grand old man of expatriated English letters. Barker herself even makes a shout-out to him at one point: “Jen interrupts her narrative for a second and gazes at the boy, concerned. ‘You do know that girls poo, don’t you? Even extraordinarily beautiful ones like moi?’ ‘Sure.’ He nods, wearily. ‘I read Martin Amis’s Rachel Papers in my final year at primary school …’ He pauses. ‘Not as part of the syllabus, obviously.’”

Barker though writes about a Britain I recognise, one I live in, even if her version of it is distorted for comic effect. Amis doesn’t seem to like that Britain very much, sensing perhaps that it’s left him behind. Besides, Amis couldn’t have written this, because he couldn’t write Muslim characters who were just as absurd and as flawed as any of the other characters, and because Barker’s men persuade me while Amis’s women rarely did (though even so I thought his generally little loved novel Night Train excellent). Perhaps though the real difference is that Amis writes in anger, Barker with amused affection.

When John Self of theayslum reviewed this I said in the comments that I was concerned that it sounded like “spending 550 pages with characters every one of whom … I’d move table in a pub to get away [from].” If I’d read then what I’ve written above now I imagine I’d have said something pretty similar. It’s incredibly hard to review Barker because it really shouldn’t work, all those characters and all that punctuation, and yet it does. It works wonderfully.

John Self’s review is here, and is the one that first alerted me to The Yips. Kevinfromcanada wrote a thoughtful and ultimately less positive review which is here. Anokatony also wrote a rather nice review here, which has a spot-on final quote. If you’re reading this and you’ve written one that I missed please let me know  in the comments, as I’d be delighted to see further thoughts on this.

16 responses to “‘Nicely punctuated. … Interesting mixture of nouns and adjectives.’”