The Forgotten Waltz, by Anne Enright

On its face (and by its cover) The Forgotten Waltz really isn’t my sort of novel. It’s a story of an affair and the impact it has on the marriages and families of those affected. Middle class adultery – Hampstead Novel territory, everything I dislike in what too often passes for literary fiction in the UK.

The truth is, if it hadn’t been for my #readwomen2014 project (see my post on it here) I might well never have read this – the subject matter has so little interest that it would likely have deterred me (even despite great reviews from bloggers such as Kevinfromcanada, John Self’s Asylum, Reading Matters and others).

Here’s the cover, with an attractive younger woman looking wistful and sad. The narrator by contrast is in her mid-30s, plump, cheerful and funny. 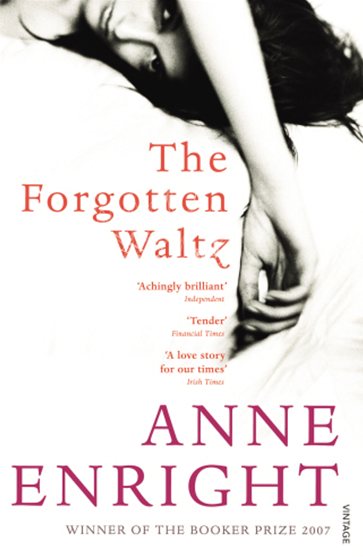 “Achingly brilliant”, “Tender”, “A love story for our times”. God it sounds awful. All that and Enright won the Booker too, could it be made to seem any more tasteful?

Mercifully, what follows isn’t tasteful at all. Instead it’s a story of a fairly banal affair, but told in a refreshingly spiky and unrepentant way, peppered with sharp observations and asides. It opens disquietingly:

IF IT HADN’T been for the child then none of this might have happened, but the fact that a child was involved made everything that much harder to forgive.

The narrator is Gina, who anyway isn’t particularly looking to be forgiven. The child belongs to Seán, the man she had an affair with, the man she’s now living with. The story is how that happened, what it did to Gina’s husband, Seán’s wife, to the child too. It’s not really a story though, more just some things that happened, some lives:

I can’t be too bothered here, with chronology. The idea that if you tell it, one thing after another, then everything will make sense. It doesn’t make sense.

You’ll see below what looks like some massive spoilers in terms of what happens. They’re not – as the quote above indicates this isn’t a story where you read to find out what happens. You know what happens from the beginning, just not how it happened. Every chapter somehow seems to contain the whole thing, just from different angles as Gina turns it all around in her mind.

The backdrop is the recent Irish boom and collapse (the events in the book span roughly 2002 to 2009). Gina works for an internet company, her husband Conor works online from home, Seán is a consultant, Ireland’s a Celtic Tiger and everyone’s making money even if nobody’s actually doing anything particularly concrete. It’s a heady time.

Gina first meets Seán at a party hosted by her sister. Nothing comes of that first meeting. Gina moves on, marries Conor whom she loves though not with any deep passion, but she and Seán are part of the same circle and they’ll meet again. Later Gina will invest significance in that first meeting, but there really doesn’t seem to be any. If it hadn’t been Seán it might well have been someone else, and she’s definitely not Seán’s first affair – just the first to be made public.

Gina and Seán are products of their time, a buoyant seemingly consequence-free time where nobody looks too hard at the underlying fundamentals and everything’s fine as long so the markets keep heading up. Gina’s smart, but she’s not reflective, and anyway why should she be when everything’s going so well? She’s a lucky woman at a lucky time. Enright captures brilliantly that sense of finding yourself somehow having become independent, responsible, in your 30s even, when inside you’re the same as you ever were. She captures equally well the artificiality of ordinary life:

Fiona keeps expecting me to help because I am her sister. She passes with an armful of plates and shoots me a dark look. Then she remembers that I am a guest and offers me some Chardonnay. ‘Yes,’ I say. ‘Yes, I’d love some, thanks,’ and we chat like grown-ups. The glass she fills me is the size of a swimming pool.

Of course they are grown-ups, all of them. The only person who isn’t is Evie, Seán and Aileen’s child, who has ongoing health issues and is about to see her parents break up through all this. That isn’t to say the adults all share the fault here, if there’s fault to be handed out it belongs squarely with Gina and Seán. Conor is the only genuinely sympathetic character in the book (and even he’s a bit of a man-child) and Aileen’s worst feature is perhaps being a bit boring, a bit staid.

[Aileen] wasn’t as old as I remembered, though she sported some very middle-aged lipstick, pinkish and pearlised, on her unprepossessing, useful face. She was wearing a black Issey Miyake pleats dress edged with turquoise, and the collar stood up around her neck in a sharp frill. It made her look like some soft creature, poking out of its beautiful, hard shell.

The pleats dress is typical of Gina’s/Enright’s eye for detail. It’s exactly what a successful middle class woman might wear – it’s professional, conservative yet still innovative (I have to admit here I’m actually rather fond of Miyake’s stuff which I think treads the careful balance between creativity and wearability particularly well). It leads too though into that wonderful image of Aileen as some kind of lovely but fragile animal, perfect but too easily broken.

There isn’t a particularly good reason for the affair. Gina runs into Seán at an overseas conference. They have a one-night stand. Later, back in Ireland, he works for a while as a consultant to her company and they meet again. Their affair is ordinary. It’s not love, it’s sex. The angriest she gets with him is when she sees an internal management report he’s written where he says that she’s “‘most ideally suited to a secondary role'”. We’re not in Romeo and Juliet territory here.

What’s works here is precisely what in a less well written novel might have had me throw the book aside. The utter ordinariness, banality even, of it all. Gina has no real insight into her own motives, she contradicts herself constantly on how she feels, what she desires. She knows she does this and she doesn’t care, her gaze is focused outwards. For me this made her all the more convincing and often rather likeable (I said she wasn’t sympathetic, but then I don’t think she’d want sympathy much). Here she is after the affair has started

At home, I was cross with Conor all the time. How could he be with me all evening, eat Indian takeaway, watch ‘The Sopranos’, and not realise the turmoil I was in? If love was a kind of knowledge then he could not love me, because he hadn’t the faintest clue. It was a strange feeling. Some fundamental force had been removed from our love; like telling the world there was no such thing as gravity, after all. He did not know me. He did not know his own bed.

Seán isn’t particularly attractive, imaginative or funny. His best feature is his confidence, often manifested rather unpleasantly in his controlling behaviour, but Gina’s hardly a passive and easily-swayed victim. He’s actually not much of a catch – successful but a married man with a child and a history of infidelity. If he cheated on Aileen there’s no reason to believe he won’t do the same to Gina. Again, he’s ordinary. If you’ve worked in an office you’ve worked with men like him.

The economic backdrop of course adds interest to all this. These characters are headed for a reckoning, but it’s not really a reckoning of their own doing and it comes for Gina’s sister or for Aileen as much as it does for anyone else. Later in the book Gina and Seán are struggling for money, the economy’s collapsed and they’re trying to sell Gina’s mother’s house but nobody’s buying anymore no matter how much they drop the price. Everyone’s hurting though, not just them.

It would be easy to see all that as a consequence of what’s gone before, and of course at the macroeconomic level it sort of is – a national hangover after a too-long party where nobody asked the right questions.At the level of individual lives though that’s reading too much in. Rather it’s just stuff that happens – Gina has a great job and a successful marriage; Gina has an affair; the Irish economy collapses; Gina and Seán leave their respective partners for each other; Gina ends up looking part-time after Seán’s kid that she never had any great interest in or rapport with. You can connect it all if you wish, draw some moral implication, but Enright isn’t that facile. It’s just life.

It’s also thoroughly, delightfully, unromantic. Each chapter is titled with a love song, but the sentiment that suggests is utterly undermined by the practicality of hotel room hookups and arrangements over childcare. Love songs anyway don’t fit with Gina’s gleeful sense of the absurd, of the ludicrousness of it all:

“I just can’t believe it. That all you have to do is sleep with somebody and get caught and you never have to see your in-laws again. Ever. Pfffft! Gone. It’s the nearest thing to magic I have yet found.”

Except, of course, that it’s not ludicrous. It’s not ultimately all that funny. A child was involved after all, a fact which underlines that actually all this does matter, that there are consequences after all, that there is fallout for Evie and for Aileen and Conor and many others. In the end, the fact that a child was involved makes everything that much harder to forgive.