Victoria exits, walking with the pursed self-conscious walk of an actor who has too small a part and so has practised a single move to excess.

The Rehearsal, by Eleanor Catton

The Rehearsal is a quicksilver novel, dazzling and impossible to grasp. It’s one of the finest debut novels I’ve read, catapulting Catton immediately onto my shortlist of authors whose new releases I’ll be eagerly tracking. As I write this I’m reading her The Luminaries (it’s massive, it’ll take me a while).

The story, such as it is, is pretty simple and follows two narrative strands. In the first, a girl in Abbey Grange High School has had an affair with her music teacher, Mr Saladin. It’s an all-girls’ school and the incident shocks teachers and parents both, leading to anguished conversations at home and communal counselling sessions at school. The second follows a boy’s application and acceptance into a local but nationally prestigious drama school and the students’ end of year project – a play about the affair at Abbey Grange.

The affair itself is never shown, instead the reader sees it only in its effects on the school community and in its interpretation by the drama students. Except it’s not that simple, because almost immediately what’s real and what’s recreation is fatally undermined. The book opens with a private saxophone tutor talking to the mother of a prospective pupil, one she doesn’t wish to accept:

‘The clarinet is tadpole to the sax, can you see that?  The clarinet is a black and silver sperm, and if you love this sperm very much it will one day grow into a saxophone.’ She leans forward across the desk. ‘Mrs Henderson. At present your daughter is simply too young. Let me put it this way: a film of soured breast milk clutches at your daughter like a shroud.’

The tutor’s monologue continues, becoming if anything even stranger, more insulting. It can’t be real dialogue. Catton can’t expect the reader to take this as a scene that’s actually happening as written. If not though, what is happening? Is this the tutor’s fantasy of what she’d like to say? No clue is given, not yet anyway. 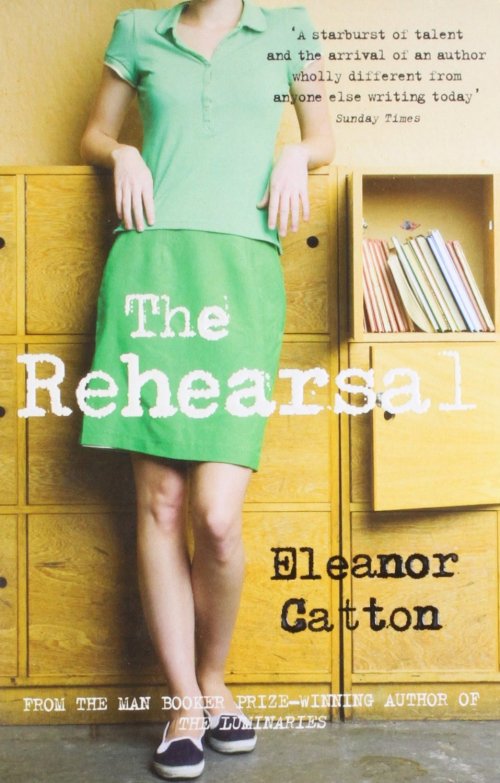 Adolescence of course is a time of struggling to get some kind of clue, to how the adult world works, how to behave. The Rehearsal is painfully good on the challenge of those years, the desire to be yourself and to fit in at the same time. There are razor sharp portraits of three very different girls, each affected by the affair (none of them though the one who actually had it), and of the boy at the drama school struggling with the same challenges in a different way.

Catton captures the fever-intensity of adolescence well then, but much more interestingly she captures the sense of trying out roles, possible selves. As the saxophone teacher says to another mother, “‘remember that these years of your daughter’s life are only the rehearsal for everything that comes after.” Life for most of us is performative. We assume roles, at home, with friends, at work; masks we put on and take off as required. In a sense who we are varies by who we’re with.

That’s fine for most adults, because you know what your roles are. Adolescence though is a period when the roles you’ll play are up for grabs. Everything is uncertain, most fundamentally who you are. Are you one of the popular kids? If so, is that all you are, and how secure is that position? Are you one of the arty kids? The science geeks? Good at sport? Or are you one of the kids who’re none of those things, without some clear distinguishing characteristic? And would you want anyway your personality to be capable of being summarised in some one-line cliché? Actually, you probably would, at least you’d know where you stood.

Stanley wasn’t sure what marked him out as a person. He hung back at the beginning of the year and let the other boys claim the roles of the leader and the player and the clown, watching with a kind of uncertain awe as they worked to recruit admirers and an audience. He guessed he wanted to be thought of as sensitive and thoughtful, but he didn’t pursue the branding actively enough and soon those positions were taken. He found himself thoroughly eclipsed by several of the more ambitiously moody boys, boys who were studied in the way they tossed their hair off their forehead, thin boys with paperback copies of Nietzsche nosing out of their satchels, boys wearing self-conscious forlorn looks, permanently anxious and always slightly underfed. Whenever these boys began to speak, the class would peel back respectfully to listen.

As the two narrative strands continue so does the question of what’s real and what isn’t. The chapters set in the school are possibly scenes in a play still being written, rehearsals, the references to parts played may be literal because actors will later (are now) playing them. The chapters in the drama school are more traditionally straightforward but then everyone in the school, and the entire syllabus, is focused on creating roles and giving them life. The drama school creates layers of truth and artificiality, with the students learning how to be other people at precisely the time they’re learning to be themselves.

Everything here is refracted, key scenes are recounted and sometimes remembered quite differently from character to character, nothing can be counted on. That of course is part of adolescence too, that sense that the world is phony and the exaggerated sense of drama one carries through those years. It’s true though far beyond that.

It’s common for perfectly competent people with responsible jobs to feel like they’re faking it, as if one day someone will notice they’re making it up as they go along and that really they don’t know what they’re doing. It’s a common feeling because most of us are making it up as we go along, we rarely know so much that what we do requires no thought, and if we do we get bored so that’s no solution anyway. We play the part of the adults we know we are. A key difference here between the teenagers and the adults who teach them is that the adults already have their roles assigned, they don’t have the same freedom to pick any more.

All this cleverness could easily come badly unstuck, become irritating even. That it doesn’t is simply because Catton is a very good writer.The book fizzes with astute little observations and comic asides. It’s often very funny (I loved a description of a key scene from the play’s opening night – “The group stand stationary for a moment, Stanley and Isolde looking at each other with an intense smouldering glare that is lost to everyone in the upper circle and in the restricted-viewing sections of the stalls.”). It’s also often painfully accurate, acutely well observed.

She watches as the other girls trip in from the cold, linking arms with their favourite friends so they advance across the room in a rectangular squadron of favourites. They negotiate seating with whispers and nudges and a desperate narrow-eyed panic, always fearful of one day occupying the terrible seats on the periphery which force you to lean across and be forever asking ‘What? What’s so funny? What did she say?’

The book is full of small insights like that one, another I could just as easily have picked comes when Stanley is auditioning for his place in the drama school and suddenly realises that all the girls auditioning are beautiful, while the boys look ordinary “as if the boys were here to audition for ten different character parts in a play, and the girls were all auditioning for a single role.”

I’m going to end on one final quote, chosen because it seemed to me to capture the book’s marvellous intersection of the awkwardly intense self-awareness of adolescence and the underlying artificiality of everyday life. Julia, one of the schoolgirls, is here talking to the saxophone instructor (though of course nobody would ever speak to their tutor, or to anyone really, in quite this way):

‘I’ve been looking at all the ordinary staples of flirting,’ Julia says, ‘like biting your lip and looking away just a second too late, and laughing a lot and finding every excuse to touch, light fingertips on a forearm or a thigh that emphasise and punctuate the laughter. I’ve been thinking about what a comfort these things are, these textbook methods, precisely because they need no decoding, no translation. Once, a long time ago, you could probably bite your lip and it would mean, I am almost overcome with desiring you. Now you bite your lip and it means, I want you to see that I am almost overcome with desiring you, so I am using the plainest and most universally accepted signal I can think of to make you see. Now it means, Both of us know the implications of my biting my lip and what I am trying to say. We are speaking a language, you and I together, a language that we did not invent, a language that is not unique to our uttering. We are speaking someone else’s lines. It’s a comfort.’

I’ve not read a lot so far in 2014, but much of what I have read has been extraordinary (Cervantes, Proust). It’s a testament then to Catton’s skill that this still stands out for me as one of my highlight reads of the year. The Rehearsal is a novel aware of its own artifice and unafraid of it, in fact it revels in it. It discards a lot of basic narrative assumptions, but not as an empty exercise in form, the style and structure are integral to reflecting the themes. Besides, it’s never frustrating because it’s such an enjoyable read.

The cover makes The Rehearsal look like a story driven novel, and the story is one that’s all too familiar and none too interesting. What’s behind it is stranger and better than that, and if it’s not on my end of year list a few months from now I’ll be doing very well indeed for my reading for the rest of the year.

The Rehearsal first caught my attention with  Kevinfromcanada’s review here, and again with David Hebblethwaite’s review here. Both those are very much worth reading (I think it’s one of David’s best reviews actually, which is high praise given the quality of his general output). I don’t normally link to newspaper reviews, but there’s also a very good one at the Guardian, here.

Tagged as eleanor catton, The Rehearsal

23 responses to “Victoria exits, walking with the pursed self-conscious walk of an actor who has too small a part and so has practised a single move to excess.”