It was a sweet setup, with a ninety thousand payoff

I don’t review many comics or graphic novels here. That’s not because I don’t read them; it’s just a question of focus. Graphic novels aren’t novels with art, and it’s a mistake to review them as if they are. It’s also why when I do talk about them I prefer just to talk about comics. It’s obvious when you talk about a comic that the art matters just as much as the writing. The phrase Graphic novel though, that implies to me it’s an illustrated novel and that’s not really what a comic is.

Except of course when that’s exactly what it is. Darwyn Cooke’s Richard Stark’s Parker is a dazzling adaptation of the original Richard Stark (a pseudoynm for Donald E Westlake) novel The Hunter. It’s beautifully drawn with a well-chosen bluish-gray colour palette and every page drips with early ’60’s cool. Although Westlake personally approved the project he sadly didn’t live to see the finally finished work. That’s a great shame, but Cooke did him proud.

That image should really be in landscape of course, but then it wouldn’t fit properly into the space I have. So it goes. Buy the comic.

The plot is simple enough. Parker has been wronged; robbed and left for dead. Now he’s back and he wants to get even. He doesn’t care who he hurts along the way. Parker’s only weapons are his charisma, his wits, his sheer physical presence and the strength of his hands. He won’t need more.

Here’s the third page (not counting title sequences and so on), with Parker striding into town. Anyone familiar with how the novel opens will immediately be able to see how without using a single word Cooke captures Westlake/Stark’s prose.

Parker soon tracks down his ex-wife, and it’s then that we see quite how much of a bastard he is. Parker isn’t a hero, he’s not even really an anti-hero, but he is a a protagonist. Parker drives the story at breakneck pace and it’s never less than exciting, but equally Parker is never anything better than brutal scum.

It’s important to say (for a Guardian reader like me anyway) that I don’t think this is glorifying violence against women. We’re not supposed to like Parker. Rather this shows how Parker solves problems – with his fists. Parker doesn’t care whether the person on the other end is man or woman, powerful or weak, he just cares about what he wants and about getting even with anyone he thinks has wronged him. Unfortunately for his ex, however good her reasons may have been at the time she definitely wronged him.

The two pages above though do help illustrate one potential problem with this comic. The female characters tend to be quite similarly drawn and simply aren’t as developed as the males. Mostly the women are pretty blondes with snub noses; the visual range for the men is much wider. I’ve not seen enough of Cooke’s other work to know whether this is just an idiosyncrasy of his particular style or whether it reflects a lack of female character differentiation in the underlying novel. It certainly feels authentically early ’60s, but not perhaps in a good way – this is a story in which men drive the action, and in which women are essentially passive.

Adapting a novel presents some challenges, not least how to deal with situations where it’s hard to avoid including solid chunks of text. The backstory to what happened to Parker, to why he wants revenge so badly, takes a little while to tell and telling it all through images could detract from the main thrust of the tale. Cooke comes up with an elegant solution, and I’ve excerpted a page below which I think neatly demonstrates it.

Firstly I think that’s a beautifully evocative piece of art in terms of illustrating the planning stage of a heist. It’s also though an elegant way to insert a fairly large chunk of text without having to use multiple pages in which there’d be relatively little actually happening. Cooke adapts his art to the needs of the narrative, but still maintains a consistent style. The result is a comic which is a consistent winner at the level of the individual page, but which is even better as a cohesive work.

One last example. If you’re a fan of classic noir cinema this should hopefully stir your heart a little. If you’re not, well, Guy Savage can recommend some films for you that will almost certainly change your mind. 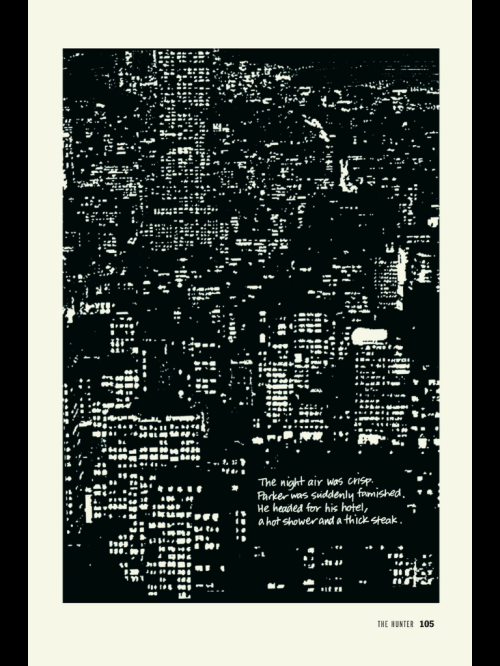 I opened by talking about how I don’t review comics here much. I made an exception for this one because I thought this such a success. This is a comic which pulses with ’60s hardboiled cool. It’s one to read with some hard bop playing in the background and a whisky on the table (well, really a bourbon but I’m an Islay fan, so whisky it is). If you don’t like comics I’m not saying this will convert you, but if you do or if you’re a Richard Stark fan and are interested in seeing a fresh adaptation of this much adapted novel (at least three movie treatments so far), then it’s a definite win.

Finally, a short technical note. I read this comic on my ipad using an app called Comixology. The app works beautifully and is how I read most of my comics these days, though given how lovely this one turned out to be I did find myself slightly wishing I’d just got a hardcopy.

Cooke has adapted two more Parker novels after this one, and has plans to do a fourth. I fully expect to be reading all of them.

13 responses to “It was a sweet setup, with a ninety thousand payoff”