Most English language readers or literary fiction don’t read literature in translation. It’s odd, but it’s true). I find that incredibly disappointing, particularly when one looks at lovers of crime fiction who react with absolute glee when new works appear in translation.

Some writers leap over the great barrier of indifference. Most serious English-language readers could name a fair range of French and Russian writers without breaking sweat. German language would be trickier, but you might get a handful, the same could probably be said for Latin American writers (and I’ve just jumped there from a country to a continent of course).

After that, after that I think most people would start to run a bit dry. That’s fair enough, we can’t read everything, but it does mean that most of us are missing out on absolute riches. Iceland has a strong literary tradition, but I wouldn’t call it a well known one. Italy of course, but few Italian writers are household names (Umberto Eco being the obvious exception). Japan has in my view one of the greatest bodies of literature the world has yet seen, but apart from Haruki Murakami I suspect most of it remains obscure even to those generally open to translated fiction.

Then there”s Hungary. I’ve only reviewed two Hungarian novels so far on this blog (Antal Szerb’s The Pendragon Legend, translated by Len Rix; and Dezső Kosztolányi’s Skylark, translated by Richard Aczel). I own though a great deal more Hungarian literature that I haven’t read yet, and that looks absolutely superb. It looks so good in fact that I suspect Hungarian literature may be up there with French and Japanese in terms of the quality of the tradition. 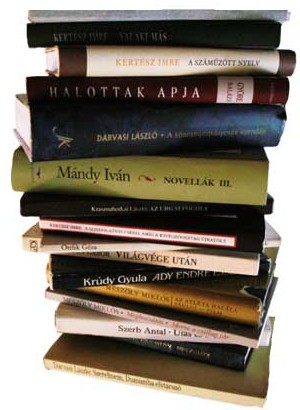 So, I’ve decided that I’m going to make September a personal Hungarian fiction reading month. All that means is that during September I’ll only be reading Hungarian literature, drawing on the titles I already own and haven’t got to yet. It’s not a challenge (how could reading great literature ever be that?) or a race, just an attempt to broaden my exposure to a body of work which I suspect I’ll find extremely rewarding.

The authors and titles I have to hand are:

Miklos Banffy: They Were Counted; They Were Found Wanting; They Were Divided (it’s a trilogy)

Gyula Krudy: Life is a Dream

Now here’s the thing. I read around 50 books a year (I thought it was more, but blog stats don’t lie). That means I probably read around three to five novels a month, depending on how dense they are and how busy I am at work. That in turn means that I’m not going to get anywhere near reading all of that list. So it goes. Besides, having more than I can get to gives me a choice each time I finish a book of what to read next, which is important.

Those caveats are ok though, because the point of all this, to the extent there is any point beyond literary whim, is personal. I’ve bought these great books, I’ve sat them on my shelf and they remain there providing a certain literary ambience and helping insulate the dining room. Those are important tasks for books, but occasionally it’s nice to actually read them too. If nothing else it saves embarrassment if a guest picks one up and notices that the pages remain suspiciously pristine.

If anyone wants to join me in this, that’s great. If not, I hope you find some of the resulting reviews interesting.

55 responses to “My Hungarian literature month”