We thought he would enter from the right…

Comedy in a Minor Key, by Hans Keilson and translated by Damion Searls

The trouble with realism in fiction is that reality is often distinctly undramatic, and indifferent to the importance of consistent theme and genre. A cop show aiming for realism will usually be gritty, but life isn’t just grit. A war novel aiming for realism may focus on mud, pain and random death, but rarely on cleaning duties and dirty jokes.

Enter Hans Keilson, and Comedy in a Minor Key. This isn’t a realist novel. It’s far too real for that. 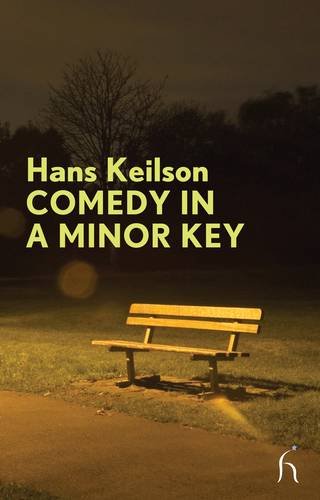 Isn’t that a marvellous cover by the way? Hesperus Press, which for me is pretty much a badge of quality in publishing.

Wim and Marie are a young Dutch couple living on the outskirts of Amsterdam. It’s World War II and each night the British planes fly overhead on their way to bomb Germany. The Netherlands are occupied, and in a small act of resistance Wim and Marie have hidden Nico, a Jew, in their home. The trouble is Nico’s just died of natural causes. Now Wim and Marie have a corpse in their house.

What follows is an exceptionally light and subtle novella. In just over a 100 pages Keilson explores the psychology of everyone involved (including Nico, much of the book looks back to what led them all to their current situation). It’s funny, in places, but the danger is very real. Nico’s death is anticlimactic for Wim and Marie, and inconvenient, but they can’t be found with a dead Jew any more than they could with a living one.

As Wim makes arrangements with the family doctor to dispose of Nico’s corpse under a nearby park bench, Marie looks through the dead man’s few possessions. She realises how difficult it must have been for Nico, condemned to living silently in a single room, and the narrative slips back to Nico’s own perspective. In the face of everyday tedium how long can one feel grateful to people, even if they have saved your life?

When he came here, to this house, he would have happily taken a place on a pile of coal in a barn and been satisfied. Now he slept in a bed, ate at a table, was treated as a human being.
But the longer it lasted, the greater his demands grew. Since he couldn’t demand anything of the outer world – what he did receive was freely offered, almost a gift – his demands turned inward and more and more excessive. But people were helping him, they were helping him, didn’t that mean anything? Yes, it meant a lot. But also nothing. He was turning into nothing. It was unbearable. It meant his annihilation, his human annihilation, even if it – maybe – saved his life. The little thorn that grows invisibly in anyone who lives on the help and pity of others grew to gigantic proportions, became a javelin lodged deep in his flesh and hurting terribly.

“The little thorn that grows invisibly in anyone who lives on the help and pity of others”. Beautiful. It’s that kind of quiet yet precise observation that makes this book so good.

In hiding a fugitive Wim and Marie are doing something brave, in a sense heroic, but nothing is ever purely from one motive. Their resistance contact, Jop, appeals to each household he wants to place someone with in a slightly different way. With Wim he appeals to patriotic duty, with someone else to their Christian charity, to another he portrays it as a “purely humane act”. We all sometimes need a little push, to help us do the right thing. There’s vanity too, of course, and the need to feel part of things:

She had secretly imagined what it would be like on liberation day, the three of them arm in arm walking out of their house. Everyone would see right away what he was from his pale face, the colour of a shut-in, which his appearance only emphasised even more. How the neighbours and everyone in the street would look when he suddenly walked out of their house and strolled up and down the street with them. It would give them a little sense of satisfaction, and everyone who makes a sacrifice needs a little sense of satisfaction. And then you’d feel that you, you personally, even if only just a little bit, had won the war.

Keilson takes familiar themes and stories, war, resistance, the tension of living in secrecy, but then gives them a light and human tweak which makes them fresh and powerful. The doctor, standing over Nico’s body, asks Wim and Marie what Nico did for a living. Nico, Nicodemus, wasn’t that the name of one of the ancient rabbis he asks? Nico though wasn’t a rabbi, he was just a perfume salesman. A rabbi would have been more romantic, more dramatically fitting perhaps, but perfume salesmen need saving too.

It was like a comedy where you expect the hero to emerge onstage, bringing resolution, from the right. And out he comes from the left. Later, though, the audience members go home surprised, delighted, and a little bit wiser for the experience. They feel that the play did turn out a bit sad after all, at the very end. We thought he would enter from the right…

Hans Keilson has received a reasonable amount of attention to the blogosphere. I first heard of him with John Self’s review, here, but it was Will Rycroft at Just William’s Luck here who really sold me and persuaded me to read this. Both have my thanks. I’m pretty sure that other bloggers I follow have also covered this, but can’t now recall which. Apologies to anyone whose review I’ve not linked to and if I have missed you please let me know in the comments and I’ll correct that.

On a slightly related note, since writing the first draft of this I’ve noticed that I picked almost exactly the same quotes as Will did. For some reason I always find that slightly reassuring. Validation that if I’ve utterly missed the point at least I’ve missed it in company I suppose.

15 responses to “We thought he would enter from the right…”