The Romance of the Rice porridge.

Six Records of a Floating Life, by Shen Fu

Six Records is a classic of Chinese literature. Written in 1809 it’s the memoir of an unsuccessful private secretary. He wrote six short volumes, chapters really, setting out his thoughts on his life, on aesthetics, on how to live. Only four of those volumes remain. They’re an invaluable resource for those wishing to understand 18th and early 19th Century Chinese scholastic life. That’s not why most people read them though. That’s not why I read them. 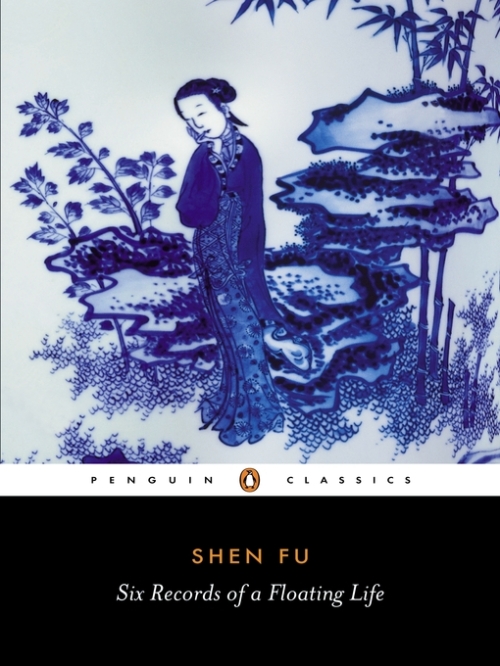 Six Records of a Floating Life is a deeply personal document. Shen Fu examines his life from different perspectives in each chapter, but in each he returns to the centre of that life – his wife and their love for each other. That makes Six Records something very unusual indeed. It’s an account of a love affair, within marriage, that’s both true and intensely affecting.

Yün had delicate shoulders and a stately neck, and her figure was slim. Her brows arched over beautiful, lively eyes. Her only blemish was two slightly protruding front teeth, the sign of a lack of good fortune. But her manner was altogether charming, and she captivated all who saw her.

The marriage was arranged when they were both just thirteen years old. They married at seventeen. Shen Fu did not do well enough in his exams to become a magistrate himself and so was reduced to being a private secretary to magistrates – a difficult and often uncertain position. Worse yet Shen Fu’s family fell out with Yün over various misunderstandings leading to him being caught between the two and for a while being estranged from his father.

All this is in 18th Century China, but apart from the marriage being arranged these are problems that could afflict most modern relationships. Career troubles, money problems, difficulties with in-laws. These are all profoundly ordinary concerns. It’s that ordinariness coupled with the openness and honesty of Shen Fu’s description of them that makes this so remarkable a book.

We sat up making jokes, like two close friends meeting after a long separation. I playfully felt her breast and found her heart was beating as fast as mine. I pulled her to me and whispered in her ear, ‘Why is your heart beating so fast?’ She answered with a bewitching smile that made me feel a love so endless it shook my soul. I held her close as I parted the curtains and led her into bed. We never noticed what time the sun rose in the morning.

The tragedy of Six Records is that Yün died in 1803, six years before it was written. That makes this work an act of memory. Yün had health problems throughout the marriage and it was difficult for Shen Fu to afford the medicine she needed on his meagre salary.

I’ll come back to that. Tragic as Shen Fu’s story ultimately is though it’s tragic because of what went before, because of what was lost. Shen Fu and Yün face many problems, but through it all they stay together even though in material terms that often makes things worse. Yün’s health problems are expensive, and the loss of Shen Fu’s father’s approval has real financial consequences. Still, for all they live a hand-to-mouth existence which neither of them is well prepared for by upbringing they live it together.

When lotus flowers bloom in the summer, they close up at night but open again in the morning. Yün used to put a few tea leaves in a gauze bag and put it inside a lotus flower before it closed in the evening. The next morning she would take out the tea and boil it with natural spring water. It had a wonderful and unique fragrance.

Shen Fu is not from a modern perspective (and probably not from the perspective of his time either) a wholly blameless character. He and Yün both are fond of good living and both at times pursue a lifestyle beyond their means. Shen Fu blows a fairly large amount of money on a business trip drinking and sleeping with prostitutes. They are both on occasion unfaithful (interestingly both of them with women and sometimes the same women). Neither of them comes across as particularly wise.

For all that it’s hard not to like Shen Fu. It’s true that it doesn’t seem to occur to him to seek work outside his class if that’s what’s necessary to get money for the medicine Yün needs. It’s true that he’s wasteful, idealistic and impractical. There’s a joy here though which for all his failings, and Yün’s too, made me wish them well even though they really existed and therefore we already know that things didn’t work out for the best.

Here’s Shen Fu on a brief period in his life when he and Yün lived in a sort of artist’s retreat, with little money but fewer responsibilities:

I said above that I read Six Records for the story of Shen Fu and Yün’s love affair. I also mentioned though how much other material is in these memoirs. Shen Fu shares his views on morality, art, even flower arranging. The following passage was, for me anyway, rather dry. I include it because the book’s not just romance and amusement. I think it’s important to read these passages, but I won’t pretend some of them aren’t a little abstract to a modern reader lacking a specialist interest in the period.

When putting chrysanthemums in a vase one should select an odd number of flowers, not an even number. Each vase should contain flowers of only a single colour. The mouths of the vases should be wide so that the flowers can spread out naturally. Whether one is displaying five or seven flowers, or thirty or forty flowers, they should rise straight from the mouth of the vase in one mass, neither crowded together nor falling around loosely and leaning against the mouth of the vase. This technique is called ‘rising tightly’. Some of the flowers should stand up gracefully, while others spread out at angles. Some should be high and some low, with a few buds in between, to keep the arrangement from looking stiff and unnatural. The leaves should not be disorderly and the stems should not be stiff. If one uses pins to hold the flowers in position they should be hidden, the long pins cut off so that none protrude from the stems. This technique is called ‘clearing the mouth of the vase’. From three to seven vases can be arranged on a table, depending on its size. No more than seven vases should be set out on one table, or it will not be possible to tell the eyes from the eyebrows, and the arrangement will look just like the cheap chrysanthemum screens sold in the markets. The stands should be from three or four inches to two feet and five or six inches tall. They should be different in height, but should be in proportion to one another so that there is an attractive relationship between the appearance of them all. If there is a tall stand in the centre with two low ones at the sides, or if the ones at the back are tall and the ones in front are low, or if they are set out in pairs, they will look like what people call a ‘beautiful pile of trash’. Whether the flowers should be dense or spread out, whether they should lean towards the viewer or away, all depends on the sense of pictorial composition of someone who knows how to appreciate them.

Shen Fu has a number of themes that he wishes to explore. Key among them is the transitory nature of life, love and pleasure. Shen Fu recollects how at one moment he and Yün “felt as if we were floating off to the land of the Immortals.” Imagery like that runs through the book, but of course they’re not immortal and in writing this after his wife’s death Shen Fu was only too aware of that. This is a book suffused with past remembered joys each of which is not to return.

Yün’s death is particularly sad, and in places difficult to read. She feels tremendous guilt at leaving Shen Fu. She feels that by dying she is letting him down.

Later she sobbed and spoke again. ‘Even someone who lives a hundred years must still die one day. I am only sorry at having to leave you so suddenly and for so long, halfway through our journey. I will not be able to serve you for all your life, or to see Fengsen’s [their young son’s] wedding with my own eyes.’ When she finished, she wept great tears.

Even writing that now I find it heartbreaking. Here is Shen Fu on the aftermath of her death:

When it happened there was a solitary lamp burning in the room. I looked up but saw nothing, there was nothing for my two hands to hold, and my heart felt as if it would shatter. How can there be anything greater than my everlasting grief?

When I was younger I didn’t understand death, even though two of my grandparents died during my adolescence. I knew what it meant, that I wouldn’t see them again, but somehow the finality didn’t impact emotionally in the way it did intellectually. In recent years though my other grandparents, my mother’s mother and father’s father, each died. I miss those who died earlier, but I didn’t understand then the terrible absence that I feel as an adult. There is a gap in the world where they were. Shen Fu lost his wife who he had loved since childhood. I would rather not imagine that.

Shen Fu wrote six records at the age of 46 (“I am now six and forty years old, adrift in the vast ocean of life.”). Nothing is known of his life thereafter. Perhaps he found love again. Perhaps he found a more fulfilling career better suited to his nature. Perhaps he died of some random infection a few months later. We don’t and likely never shall know.

All we have then is this magnificent tribute and act of memory, except magnificent is the wrong word for something so domestic and so personal. Yes at times it’s a little dull as Shen Fu expounds on an aesthetic principle that is of only academic interest today. Yes it’s at times exasperating as he enjoys himself on pleasure barges spending money his family could better use. Yes it’s incomplete and yes the structure makes it at times repetitive. For all that though it is profoundly human and that for me makes it literature, even if literature hampered by the limits of truth.

This is a modest book, and in many ways a wistful one. Shen Fu knew he was not a success, and he knew that the greatest passion of his life was likely already behind him. Even so he left us this, and the irony is that this failure of a man (on his and his society’s terms) left one of the very few books I’ve ever read that brought me close to crying as I read it. Even so I didn’t find it depressing. It’s tragic to lose someone loved and Shen Fu, long dead as he is, has my every sympathy. For twenty three years though he knew love, and so did Yün. That’s no small thing.

I read the Penguin Classics edition of Six Records (on my kindle but there are some lovely illustrations so a hardcopy would here be the better choice). I’m sure free versions exist, but the Penguin edition came with some extremely helpful essays and footnotes which helped me understand the social and political contexts of Shen Fu’s life and which are well worth paying a little extra for.

11 responses to “The Romance of the Rice porridge.”