… the kindness of strangers

Years ago when I read Colm Tóibín’s The Heather Blazing I was blown away by it. It was well plotted and had interesting characters but that wasn’t what really impressed me. It was the writing. The sheer quality of it.

It’s odd then that it was years before I read another Tóibín – his first novel titled The South. I didn’t love as much but I still enjoyed it. Years passed again though and I still didn’t read more by him. I can’t say why.

A little while back now I bought a Kindle. When I loaded it up with books for some recent holidays I noticed that Brooklyn was available. I’d read a lot about it and on a whim bought and downloaded a copy. I then largely forgot about it as I always seem to forget about Tóibín. When I finished my recent Gerald Kersh though I decided I wanted something quiet and beautifully written.

Quiet and beautifully written are words I associate with Tóibín’s work. Brooklyn isn’t an exception. It’s a simple and arguably dull tale with a rather passive central character who largely goes with the flow of (not particularly eventful) events. If not for the writing it would be unreadable. 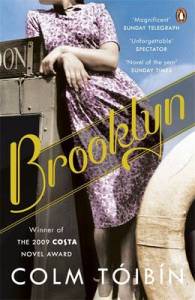 Eilis Lacey is a sensible young woman living in rural Ireland in the 1950s (and not the 1930s as I thought for the first half or so of the novel) with her mother and her older and more sophisticated sister. There are few job opportunities. Her brothers have both moved to England where they seem to be doing well but they rarely get to visit home. Eilis is studying bookkeeping, but the only job she gets is working on the floor of a local shop.

Father Flood, over from the US, notices Eilis and is unhappy that there’s nothing better available for her. After discussions with Eilis’s mother and sister they all decide that the best thing for her is emigration. Father Flood can help set her up in Brooklyn, and while she won’t be a bookkeeper immediately there either with time anything could happen.

Father Flood wrote a formal letter sponsoring Eilis and guaranteeing to take care of her accommodation as well as her general and financial welfare, and on headed notepaper came a letter from Bartocci & Company, Fulton Street, Brooklyn, offering her a permanent position in their main store at the same address and mentioning her bookkeeping skills and general experience. It was signed Laura Fortini; the handwriting, Eilis noted, was clear and beautiful, and even the notepaper itself, its light blue colour, the embossed drawing of a large building over the letterhead, seemed heavier, more expensive, more promising than anything of its kind she had seen before.

Eilis moves to Brooklyn. She stays in Mrs. Kehoe’s boarding house with other Irish girls and gets a job in local department store Bartocci & Company (again on the shop floor). She gets homesick, but gets over it and in time meets a local boy with whom she falls in love. As their romance develops problems back home in Ireland require her attention and that’s largely as much plot as I’ll summarise.

In terms of an individual life these are big events. Leaving Enniscorthy. Crossing the Atlantic third class in the bowels of a ship. Adapting to life in a new country. Meeting new and foreign people. Falling in love. This is what life is made of. Few of us bust crime cartels wide open, discover cures to rare diseases, race against time to save a city from disaster. Personal dramas tend to be small and private in nature and not the stuff of gripping fiction.

Tóibín then has written a novel in which things that would only really be exciting to those living them happen to a woman who though pleasant isn’t very interesting. Eilis admires her sister and respects and loves her mother. She gets along well enough with her housemates at Mrs. Kehoe’s and with the people at work. She doesn’t make waves and is happy to fit in with other’s plans.

Occasionally Eilis’s passivity backfires (there’s a tense changing room scene where it becomes apparent that the person helping her change has an interest that is more than professional in ensuring Eilis fits into a bathing costume she’s trying on). In the main though it’s not a problem because almost everyone she meets is decent and helpful.

Father Flood has no ulterior motive here. He’s just doing his best to help out someone he thought needed help. Mrs. Kehoe has her foibles, but she’s basically a good woman. Some of Eilis’s housemates are silly and some prudish but there’s little harm in them (little, but not none – I’ll come back to that). Even Eilis’s boyfriend is kind, patient and funny and wants mostly to make her happy.

Tóibín uses all this to examine the contrasts between life in rural Ireland and life in the US. Enniscorthy is small and gossipy where Brooklyn is large and anonymous. Propriety is important to people back home and there are rigid social codes and a clear heirarchy all of which seems missing in the US. When Bartocci & Company decides to allow “colored” shoppers through its doors though it becomes apparent that Brooklyn has its own heirarchies and codes which just weren’t as immediately apparent.

Brooklyn is a novel of emigration. On her way to Brooklyn Eilis stays briefly in England with one of her brothers. Her mother and sister haven’t laughed much at home since he left and it’s a joy to Eilis to see him. He has no plans to return home to a jobless Ireland but life in England isn’t easy either.

‘What are they like?’ she asked. ‘Who?’ ‘The English.’ ‘They’re fair, they’re decent,’ Jack said. ‘If you do your job, then they appreciate that. It’s all they care about, most of them. You get shouted at a bit on the street, but that’s just Saturday night. You pay no attention to it.’ ‘What do they shout?’ ‘Nothing for the ears of a nice girl going to America.’ ‘Tell me!’ ‘I certainly will not.’ ‘Bad words?’ ‘Yes, but you learn to pay no attention and we have our own pubs so anything that would happen would be just on the way home. The rule is never to shout back, pretend nothing is happening.’

In Brooklyn Mrs. Kehoe’s seems to be Enniscorthy in miniature. Father Flood’s church with its Christmas dinner for destitute Irish men is another export of home. The Irish in Brooklyn live with other Irish, look to the church for charity and succour, date and marry within their own community.

There’s a broader point being made here. The emigrant Irish try to recreate Ireland in their new home. They try in a sense not to be emigrants, which given how few of them seem to have wanted to leave isn’t really surprising. Despite their efforts though they’re not home any more. Mrs. Kehoe’s house and Father Flood’s church are surrounded by another world. The Irish keep to the Irish, but around them are the Blacks, the Jews, the Italians. All of them keep to a degree to themselves, but as they move past each other in the pot the edges of all of them are melting.

When Eilis has to return to Ireland on family business she’s become a different person. To the people she left behind she’s now glamorous and tanned. Her clothes are more fashionable and more expensive. She seems more confident, but how could she not? Emigration has changed her as it’s changed waves of emigrant Irish over generations.

This is a novel about the emigrant experience then, but it’s not just that and it’s not at all heavy handed in making its points. Tóibín has a marvellous knack for crafting dialogue and also a good eye for comedy. The scenes in the transatlantic crossing as Eilis and her bunkmate battle their neighbours for a shared bathroom are tremendous and the exchanges at Mrs. Kehoe’s dining table are vivid and neatly observed:

‘Where I’m from,’ Miss McAdam said, ‘we didn’t go out at all and none of us were any the worse for it.’ ‘And how did you meet fellows?’ Diana asked. ‘Will you look at her?’ Patty interjected. ‘She’s never met a fellow in her life.’ ‘Well, when I do,’ Miss McAdam said, ‘it will not be in a saloon bar.’

There are occasional dark undertones. I mentioned earlier that the women at Mrs. Kehoe’s weren’t entirely harmless. Nor is Eilis. The Irish community is supportive and helpful, but it’s also judgemental and snobbish and the treatment Eilis and the rest dish out to a new housemate who by their standards is of a lower class to them is ugly and petty. Eilis herself receives similar treatment from the woman who owns the shop she works in back in Enniscorthy. None of this is ultimately much more than harsh words and a bit of meanness. Like so much else here it’s significant to the person it happens to but not much more than that.

Brooklyn is a novel almost without conflict. The small rivalries in Enniscorthy and Mrs. Kehoe’s aren’t ones that are going to have any real impact on Eilis’s life. The challenges she faces are eminently surmountable. Eilis’s acceptance of what others do and plan for her means she meets little resistance along her way. All this should make it dull and I think for some readers it probably would be dull. Not for me though.

Tóibín takes an ordinary life facing ordinary issues and makes it real and compelling. It’s the prose which sells it. Brooklyn is just so well written that the lack of event was not only not a problem for me – it became a strength. What’s important at the individual level isn’t the sweep of history. That’s our backdrop. It’s those things which would interest nobody else that really matter.

Brooklyn. This has been heavily reviewed already of course. Here’s some takes on it by Kevinfromcanada, The Asylum, Themookseandthegripes and Hungry Like the Woolf. Kerry’s review at that last link knowingly contains spoilers on essentially the entire plot which allows Kerry to craft a very fine analysis of Eilis’s character – if you’ve already read the book or know you won’t it’s well worth reading. If you haven’t read it but might it’s probably best left for later. Trevor’s particularly good on a major theme of the book which I’ve not even touched on here – separation and distance.

27 responses to “… the kindness of strangers”