A slight Misunderstanding, by Prosper Mérimée

There are few things less romantic than a French novel about love. A slight Misunderstanding, a novella written in 1833 by Prosper Mérimée, is no exception. 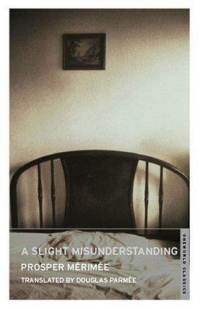 Mérimée was, in his period, a well known and regarded writer. A slight Misunderstanding comes with a back cover recommendation from Henry James and 1958 translator Douglas Parmée in the foreword notes that “a distinguished committee of well-known French authors and critics, in choosing the twelve best novels of the nineteenth century, included in them La Double Méprise.” Parmée goes on to describe it as a masterpiece, high praise then.

For me, masterpiece goes too far, however despite that I enjoyed Misunderstanding and I can certainly see why James might have been a fan.

In Douglas Parmée’s translation, which despite being now over 50 years old was I thought clear, crisp and still fresh, Misunderstanding comes in at a brisk 115 pages. Within them, we meet Mme Julie de Chaverny, trapped in a loveless marriage with her husband of six years, Chaverny. Julie is a pretty young woman, once high spirited and imaginative, her husband though of good family is a vulgar and unappreciative man. Julie is pursued by the dashing young Major de Châteaufort, who seeks to become her lover. Matters transform, however, when her old friend M. Darcy (yes, Darcy) returns from Constantinople awakening old affections and bringing with him a new exoticism that the men of Paris struggle to compete with.

Parmée refers to the plot as banal, which is fair. There is no story so traditional in French literature as that of the bored wife, the boorish husband, the uncaring lover. The plot here is utterly predictable, sufficiently so that I would not consider it a spoiler if I were to repeat it in whole below (though I shan’t, as others may differ). The only unusual element is M. Darcy, a fourth player in the ancient love triangle, a rogue element in a story that otherwise was likely told by one French caveman to the other.

Why then, if so predictable, is it worth reading? Not the characterisation, none of the characters are deeply drawn, all are shallow, interchangeable even (though of that, more shortly), Mme. de Chaverny is not a particularly sympathetic heroine, there is little to choose between the merits of Major Châteaufort and M. Darcy, what is left then is the prose.

And the prose, generally, is excellent. Mérimée has a sharp observational eye and a dry turn of wit. For the first half or so of the novella, I could barely turn a page without a sly witticism, so softly uttered that one could blink and miss it. Descriptions are acerbic, unmerciful, yet affectionate too. Language is used with great precision, not a word wasted. Here we meet Major Châteaufort and his faithful friend Major Perrin for the first time:

Major Perrin was sitting at a little table, busily reading. His well-brushed coat, his cap, and above all, his posture, stiff as a ramrod, proclaimed him to be an old soldier. Everything in his room was spotless, but extremely simple. An inkwell and two quills already cut were on the table beside a pile of writing paper, not one sheet of which had been used for at least a year. If Major Perrin didn’t write, he at least made up for it by reading a great deal. At the moment, he was reading Montesquieu’s Persian Letters whilst smoking his meerschaum pipe and these two occupations had so engrossed him that at first he did not notice the entrance of Major de Châteaufort. He was a young officer from his own regiment, with a charming face, extremely likeable, somewhat conceited, a protogé of the Minister for War; in a word, the opposite of Major Perrin in almost every respect. Yet, quite unaccountably, they were great friends and saw each other every day.

The description of the room is light yet exact, the comment about the unused pages dry but not unkind. What will not be apparent, from the passage above alone, is that the description of Major de Châteaufort is surprisingly similar to that of Chaverny in his youth when first he won his wife.

Later, we come to a description of M. Darcy, when a younger man:

In the old days, Darcy had been a person of no consequence whatsoever in Mme. de Lussan’s set, because it was known – certainly every mother knew – that his lack of money would never permit him to think of marrying any of their daughters. And as far as the daughters were concerned, there was nothing about him to turn their pretty young heads. In other respects, he had the reputation of being a gentleman. Being something of a misanthrope as well as having rather a caustic tongue, he enjoyed making fun of the absurdities and pretensions of the other young men, whenever he found himself the only man in a group of girls. When he was seen whispering to some girl, their mamas were not alarmed, because their daughters used to laugh out loud and mothers with daughters who had nice teeth even used to say that M. Darcy was an extremely pleasant young man.

What impresses me here, apart from the vicious wit of “mothers with daughters who had good teeth” approving when Darcy made those daughters laugh out loud, is the density of social description. We have rules regarding marriage, but rules too regarding affairs for it is clear if a daughter is laughing openly that nothing untoward is occuring. Mérimée is nothing if not precise in his language.

As noted above, Major de Châteaufort is little more than a young Chaverny, Darcy too though is cut from similar cloth. He is wittier, less dashing, but armed with the power of his exoticism fresh from his return from the East he is irresistible. Chaverny wooed his wife in part with the promise of construction of a special carriage for her, Darcy seduces her in his own carriage, an irony that all Paris society (and therefore Mérimée’s original readership) would well appreciate. Indeed, for a short work, it is full of irony, from the differing accounts of Darcy’s heroic rescue of a Turkish woman during his stay in the East and his later reflection on the incident which sheds a different light on it again, to the core simliarity of every male character in Julie de Chaverny’s life. Julie de Chaverny loathes her husband, is attracted but only shallowly by Major de Châteaufort, is washed away by Darcy, but they are all really the same man – slightly differing manifestations of the same cool Aristocratic wit and disengagement. Here, the difference between a husband and a lover is not one of character, but merely of complacency. De Châteaufort and Darcy are still trying, Chaverny no longer needs to.

The curiosity of A Slight Misunderstanding, is that as I write about it, it grows in my mind. The beauty of the novella as a form is it gives space to explore an idea, but its brevity gives space too to allow it to echo beyond the page, unfolding still in the mind once finished. Misunderstanding is a work characterised by a plot that even in the early days of 1833 would have suprised noone, its criticism of French society is mild, none in it are likeable but there is none of the anger of Laclos. Still, its cool manner, clarity and pared-back style remain after the book is finished, and having read it I already find myself wanting to read it again.

I read A Slight Misunderstanding in the excellent Oneworld Classics edition, an imprint new to me but one I shall look out for again as physically the book was printed on good quality paper, with generous but not excessive use of spacing and margins which helped make it an easy read. It comes with an attractive cover image of a rumpled bed which managed to be both restrained yet apt. Oneworld Classics are I hope proud of the job they did producing it, and I’m grateful to them for bringing it to my attention.